I’m not going. Not out of protest or anything. I always said I would go, and I have heard great things about the 20th compared to other years — people have grown up by then, they’re happy to be alive, they remember the good times. I would kind of like to go. But I’ve decided against it for a number of reasons. 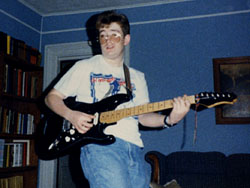 High school was very intense for me, and I still draw on it a lot. I was super active and I was a super outcast. I had a close circle of friends but in the Venn diagram of high school, my group did not intersect with the cool kids. The homecoming king and queen were, of course, the quarterback and a cheerleader; I, meanwhile, formed the school juggling club. The only time I felt I got reflected glory and acceptance is when we did a talent show/spirit rally thing, and I wrote a song called “Polyester Blues” about our outdated school uniforms, and we performed it as “Dan the Man Amrich and the Snugglebunnies from Hell.” That went over very well. But most of the rest of the time I felt like I was fighting for respect. I think it’s still part of what drives me.

I went to the 5th year anniversary, and I don’t recommend you do that. Too soon. It was awkward; people who were lucky enough to go to college had just gotten out; people who weren’t sort of felt like they’d missed out and there was a schism. I dragged my then-fiancee along to prove that yes, I could get a girl, and I bragged about working at a guitar magazine in NYC. I cannot imagine anyone was impressed, and I felt like a douchebag for doing it. It did not make me feel better.

My social circle put together the 15th year reunion and I missed it. I’m bummed about that, but when the reunion is in NJ and you live in CA, it’s a bit of a hike. And that’s one of the reasons I’m not attending; it would be expensive and it’s the weekend after Thanksgiving. I can’t imagine a worse time to have to travel. If I were still local, no question, I’d go. 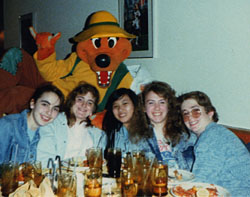 But the other thing is that in the last 20 years, the internet arrived, and as such, I have a pretty good line on where my friends are now and what they’re up to. We’re all on Facebook; we talk. I have one or two people I have lost touch with and I would like to see them, but through the people who are online, I know I can track them down. It’s certainly better than flying 3000 miles and hoping they show up.

Anyway, I dug through some old photos and scanned them in for the reunion slideshow; if I can’t be there, I can at least throw my old friends under the bus with photographic evidence of our collective poor choices in hairstyles and fashion. And next time I’m in town, I’ll look up the folks I really want to see. Until then, I’ve been pretty good at living my life just public enough that if someone types my name into Google, they’ll find out what I’m up to. Hey, you did.