No longer in danger of getting freebies through my job, I went for the PC version of Borderlands when Kat showed an interest in playing co-op. Kat is a mouse/WASD person and is not comfortable with console controllers, but in a weird twist, Borderlands is not comfortable with PC interfaces. It’s a clear sign that the industry is building things with 360 and PS3 in mind, then adapting it to the PC audience; the opposite has been true for years. And while I am still proudly platform agnostic — if it’s fun, I’ll play it on anything — I was disappointed that I had to edit the .ini files to do simple things like remove horizontal tearing with vertical sync and change the field of vision, which was awkward but I couldn’t put my finger on why. These should really be in the options menu and I hope they will be after a patch.

That said, this is Kat’s first serious attempt to get good at a shooter. We bought Left 4 Dead on PC and she liked it but never felt comfortable; this was more of a fresh start for both of us, since I hadn’t done any previews or played Borderlands yet. She likes the art style and I do too. I’m playing the sniper class, she’s playing the token female character and trying to learn how to use her phasing power. Funny thing is, she picked up a sniper rifle in the game and now wants to snipe! 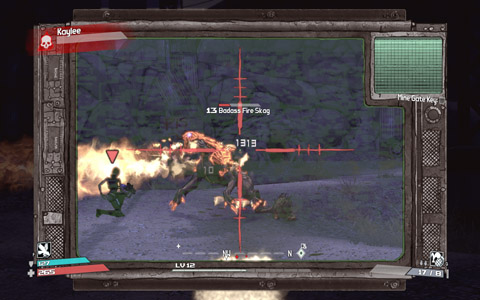 So far: good game, could use a little tweaking. The critiques I’ve read seem fair, and I hope a patch will help smooth out the rough edges. Until then, they’re not stopping our fun.