Ever the gadget girl, Kat spotted a deal on woot.com recently — an EEE PC 900A for just $170. I’ve been complaining about my discomfort writing on airplanes during my frequent biz trips; I like working in the air, and I adore my Dell D630, but I hate the guy in front of me who always reclines his seat to the max immediately and makes it impossible for me to open my notebook all the way, let alone type on it. So I have been thinking, “Hmm…maybe I’ll get a netbook just for typing on trips, but $300 is a bit steep for that convenience.” An Atom-powered model with 1GB of RAM $170 solves that nicely, so after quite a bit of prodding from Kat as the deadline ticked down. I jumped.

Then I found out the thing is a piece of crap. Not permanently; the processor is good, and the machine is very easy to upgrade. But it was a bargain as it shipped because it was ill-equipped. With a small, slow 4GB SSD drive that was stuffed to the gills with unnecessary, outdated, Chinese Linux apps, it was pretty unpleasant to use. At the advice of almost the entire EEE-owning internet community (and the guys from Maximum PC), I picked up a 2GB stick of RAM and a 32GB SSD drive. These extra parts brought my total up to — you guessed it — $300, but that’s still a little cheaper than the current crop of good netbooks ($350-$400), and I bought name-brand parts for it. Warranty’s void, but so what? Girls buy shoes and handbags; this is my fashion accessory. (Oh, wait, I also buy shoes.)

The hardest part of installation was one of the tiny screws on the existing SSD didn’t wanna come out. Pfft. Nathan‘s leet skills made quick work of that for me. I popped everything in, used the USB DVD burner I got for Kat for Christmas to install the beta of Windows 7, and I was off to the races. 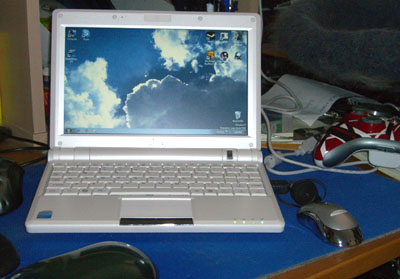 And Windows 7 is niiiiice. I never upgraded to Vista because I heard so many bad things about it; I have four PCs in the house all still running XP and I know that OS well. But if this little netbook can crank with Win 7, I can only imagine what it will do on my quad-core.

Everything in Win 7 worked fine except for some minor driver issues — I had to track down an older video driver as well as the trackpad driver and the ACPI driver to make the Fn keys (volume up/down, brightness, etc) work properly. After only an hour or two of combing the net, I found everything I needed — this hack/mod/upgrade is very popular, so many people had already found the answers I was seeking and shared them with the world. The internet is cool.

The EEE is also a nicer piece of work than I thought. Three USB ports is one more than Kat’s 15″ MacBook Pro comes with, and that cost $1500. With an Ethernet port and analog audio inputs, it’s got the makings for a great podcasting Skype machine. There’s an SD reader built in, so I popped a few of my iPod movies on there and they play perfectly (and don’t take up hard drive space). Plus, there’s VGA out if I ever want to leave the confines of 1024×600. Maybe this loadout is standard for a netbook, and if so, I’m happy to hear it — the right stuff is in this tiny box, even if the battery only lasts three hours without WiFi turned on (which it won’t be, on a plane).

With one exception. I am a keyboard snob and I knew that buying a netbook meant I would never be 100% happy with it for that reason alone. I am proud to type comically fast and I use one of those fancy split ergo keyboards. I take touch-typing exams at 80wpm, write extemporaneously at work at 100wpm, and rant on the internet at around 120wpm. This array of tiny pieces of plastic with letters on them is simply not a keyboard by my definition. It feels flimsy and cramped, and I knew that going in, but I still don’t like it. I will learn to use it, though. I am forcing myself to write some stuff on it this weekend just to start breeding familiarity before I find myself on deadline at 30,000 feet. I just keep telling myself one thing: It’s better than not writing on the plane at all.

Of course, first thing I wanted to do after installing OpenOffice was try to get some games on there. The August 2009 issue of PC Gamer has a great article on netbook gaming so I will take some of their advice. In the meantime, I still have a ton of PC games from the 800×600 era on my shelf here, and many of them…do not work. The netbook’s unusual resolution confuses them, and Trackmania Sunrise, Majestic Chess, and Monopoly (Encore’s excellent 2007 edition) all had problems of one stripe or another. 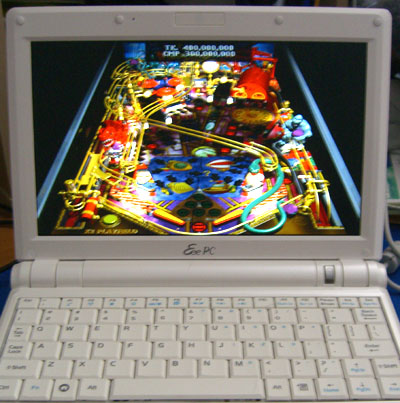 GOG to the rescue. My Good Old Games installers of two of the three Pro Pinball games worked fine; Fantastic Journey actually works brilliantly, like it was built for the hardware. 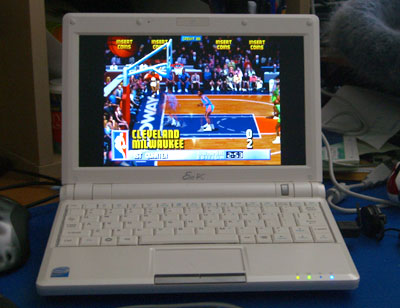 My MAME ROMs are long out of date, but a bunch of the 80s classics (Ms. Pac-Man, Raiden, Asteroids Deluxe, Mr. Do’s Castle, Atari’s Tetris) still worked with the latest build. Amazingly, I can run the original Mortal Kombat and NBA Jam TE fine (but I can’t run NBA Hangtime smoothly — darn). Also, the utterly awesome Plants vs. Zombies ran without a single hitch.

So…I guess what I really did was loaded the machine up with a bunch of reasons not to write on airplanes. But the point is, if you have a netbook, go Win 7. It’s almost entirely painless.