I know I promised photos of the new car, but I’ve been working late so the only time I can snap a photo is at night, and those shots came out poorly. Even now, as the sun shines, Kat is off galavanting around in the car without me. So eventually.

Meanwhile, I found these shoes. 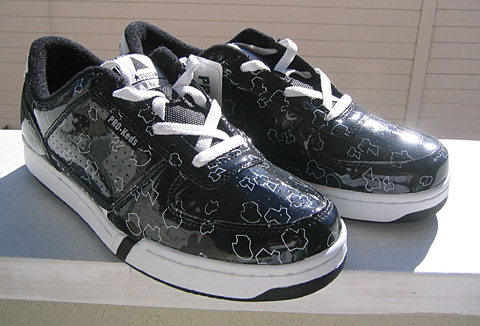 In the spring, Pro-Keds did a line of limited footwear inspired by classic arcade games — Galaga, Pac-Man, Centipede, Super Mario Bros., and as you can see, Asteroids. I got very excited about these when they were announced in the spring, and I figured they would be sold out everywhere and sort of given up. But then I found them here last week. Now I finally have some shoes to rival the infamous flame sneakers, which are not only no longer made, but the dotcom that made them went down too.

You can find the other models scattered around various online shoe stores but nobody seems to have the full collection (which is proabably just as well for me). I’ve just ordered the Pac-Man variant from Zappos and then I’m stopping, I swear.