It was another great show as usual. Parking was easier; the hall was just the right size. And amazingly, it was near a Bennigan’s, which I didn’t think existed any more. I had fun losing the trivia contest for the third year in a row — I’m on a streak. Anyway, on to the photos. 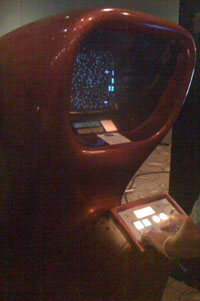 What better place to start than Computer Space? One year there were three of these machines on display; this year, just one. Computer Space predates Pong; it’s what Nolan Bushnell built before forming Atari. Playing it, you can see why it wasn’t a hit; it’s pretty complicated for an Asteroids forebear. But that maroon fiberglass cabinet is the bomb; it will always look like the future to me. No Pong this year that I could see, but there were plenty of old-school pinball machines up and running, and some electromechanical oddballs like Shoot the Bear.

Back to the Future is my second-favorite pinball machine of all time. This is the first year it was at the show. It was for sale. It was $1650. I said no, but Kat said no too just for good measure. But it did make me want to figure out how to get Visual Pinball running again. Working on that now. 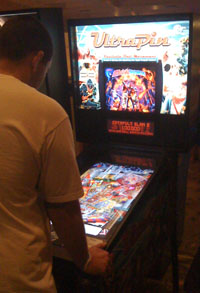 Or, you know, I could just get a full-sized pinball machine emulator. I saw Ultrapin two years ago at the show, and apparently it’s gaining steam. The model I played had eight great Williams tables loaded (including F-14 Tomcat, Medieval Madness, and Black Knight 2000) and even offered physical feedback from the flippers with real solenoids. The perspective is a little freaky — after all, you are looking at a flat-screen HDTV, not an angled playfield, so the machine simulates the angle for you. Pretty nifty. Kat probably would say no to that too, just on the basis of us not having space for (and I hate to admit it but she’s right), so I didn’t ask if I could get one. But I do like the idea of a pinball machine without physical maintenance. 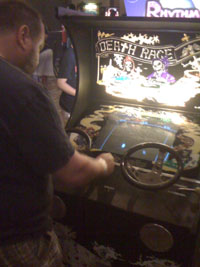 This being the show’s 13th year, one of the commemorative t-shirts was of the artwork from Death Race. I have always wanted to play Death Race for its infamy — the first banned game. The goal is to drive your blocky little car over blocky little “gremlins” that look suspiciously like humans. Better still, the operator can change the pitch of the noise they make when you run over them so that it sounds like a human scream. I played it three times; each time I killed more, um, gremlins. A winner at vehicular homicide is me. 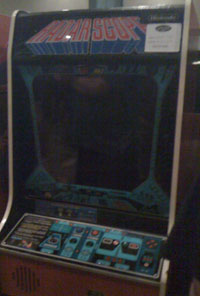 I was sorry to see this machine dark, because it’s historically very important. RadarScope was Nintendo’s first coin-op arcade game in America…and it was a massive failure. Nintendo found themselves with a warehouse of unsold cabinets, so a bright young engineer by the name of Shigeru Miyamoto was called upon to come up with a new game that would run in those cabinets so they could sell them. He came up with a funny little game about a mustachioed guy in overalls who tries to get his girlfriend back from a giant gorilla. And so, all the unsold RadarScope machines were converted with stickers and new marquees and became Donkey Kong instead. I’ve always wanted to play RadarScope, so I’m really bummed that this machine was not operational while I was there. 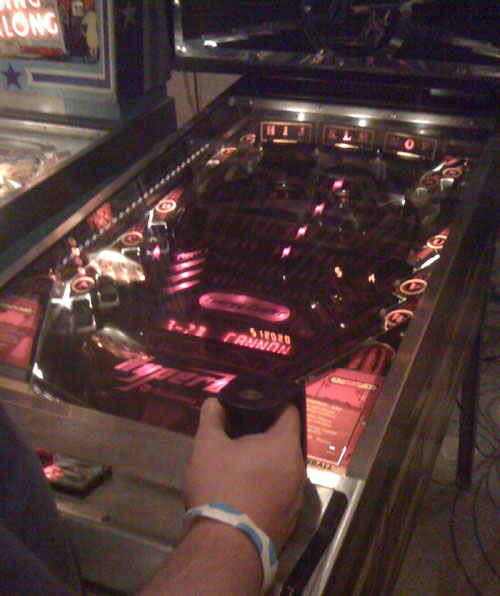 Hyperball is something I now look forward to playing every year. It looks like a pinball machine, and it uses pinballs, but it’s really a game of…spelling. You grab the two top-mounted grips and shoot pinballs at the letter targets around the edge of the playfield, spelling out whatever words it tells you to spell (in this photo, you can just make out the playfield saying “CANNON” on the LEDs). As you do that, you have to blast incoming attacks from falling lightning bolts (which you can make out in this photo too). The machine holds several dozen pinballs and can actually fire 250 a minute. God bless you, Steve Ritchie. 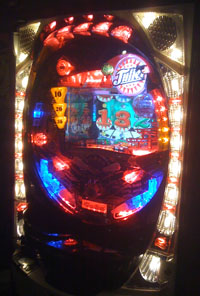 Okay, this baffled me. I never really understood pachinko but when I saw “Julie Pinball Pachinko” I had to try it. Apparently I am awesome at it, because it started spitting out so many tiny silver pachinko balls that someone had to come over in the middle of my massive jackpot and refill the machine. During this super extra mega awesome jackpot, I was treated to Japanese karaoke and I managed to light up a mini pinball machine in the middle of the playfield for a bonus round (which I just barely lost). In Japan, the balls are used as gambling currency. Watching the endless payout, a friend said “You would be rich right now.” People started asking me how to play and I didn’t know what to tell them!

This monstrosity is Tank 8. That’s Atari’s Tank — better known in its home incarnation, Combat — for eight players at a time. The machine was often in use, but we managed to find a time when we could get eight people on it at once. The results were hilariously chaotic, as all you could do was drive toward people, shoot them, and try to get away before someone spotted you and did the same to you. Highly recommended for the five or so minutes you will play it before becoming horribly bored. Hey, it’s the social gaming experience that makes stuff like this fun — if you weren’t running around with a group of friends, you wouldn’t try it in the first place. 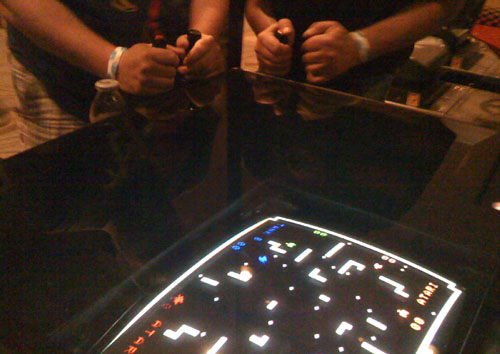 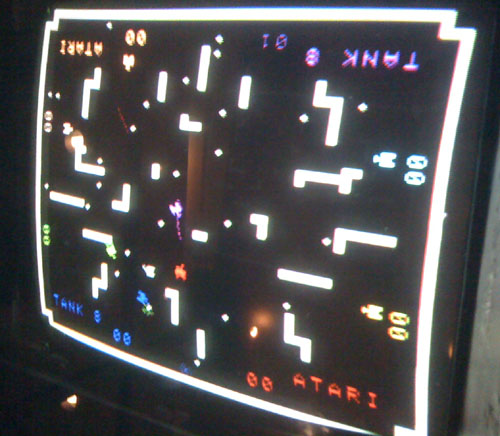 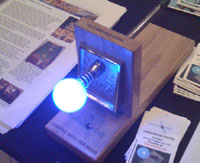 I like things that glow. Lava lamps, neon lights, Christmas lights…anybody who saw my old office at GamePro can attest that it was basically a college dorm room without the bed. I found two cool glowing things at the show — a modifcation for pinball plungers that cycles through every color you can think of (I caught it while it was blue by luck). Hell, why not? 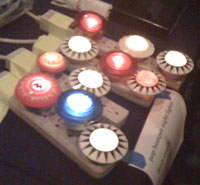 The other glowing thing was even cooler: old pop bumpers harvested from long-dead pinball machines, converted to nightlights. I bought one of them for $10 and they were all gone by mid-afternoon. If you ever come over to my place, stick around and wash your hands in the upstairs bathroom in the dark. You’ll get 100 points. 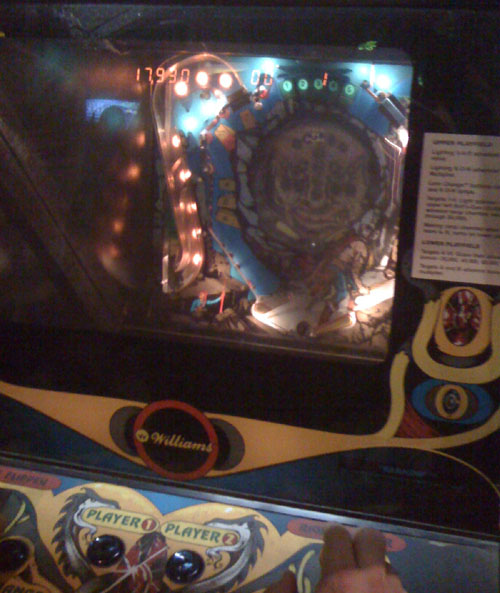 And now, the annual “I have never seen or played that before in my life” game — this year, it’s Varkon, an amazingly rare (less than 100 were made) pinball machine hiding in the cabinet of an upright video game. Williams released this shortly after Hyperball. Two levers controlled the flippers, and buttons switched the lights on the lanes. A peek over the horizon showed that what you saw while playing was a mirror image of a playfield below; it’s a tiny little playfield that still follows all the rules of physics as you would expect, but it seems like you’re shooting the ball straight up int he air. It was awesome. For more info, check out the IPD entry.

There was more but I’ve bored you enough. Next year, come to the show with me and I’ll babble through it incessantly with all the trivia that comes to the top of my head. And I’m thinking of finally bringing my games next year…