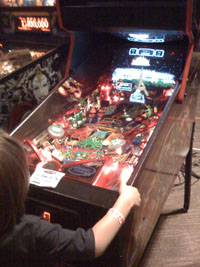 This weekend is the annual California Extreme arcade show. Picture a giant room with about 300 classic coin-operated videogames and pinball machines all set to free play. Some are rare (Jungle King was there last year) and some are uber-rare (unreleased prototypes from Atari such as Beavis & Butthead, Sparkz, and Marble Madness II show up often). Then add in vendors, speakers (Steve Ritchie is giving a talk on pinball; MAME developer Aaron Giles will be revealing some secrets; Backbone is discussing how they update old-school games for XBLA), and a trivia contest (which I have never won, but I did make the final two teams last year). There will also be the annual pinball competition, joined this year by a Guitar Hero Arcade tournament. Bottom line: Every year, I see, do, or play something I have never seen, done, or played before. It’s fantastic.

I’m not bringing any of my machines (I would like to some year but do not have a vehicle that can carry them), but I am going on Saturday as usual, and I’m looking for a pinball expert to round out a trivia team. If you are anywhere near the Bay Area, I urge you to get there — it’s well worth the money (one very reasonable price covers everything), and it’s a show put on by collectors out of sheer love. I am proud to support it.

For a taste of what to expect, here’s my reports on the 2008 and 2007 shows. If you’re going, let me know and we’ll meet up. I know AJ Glasser from Kotaku is going to be there, and I’m looking forward to reconnecting with a few other old friends…both human and plywood.