It’s a very good show this year. I mean, it’s always a good show, but I really had a blast this year, played a lot of games that you simply can’t find anywhere else or enjoy in their original incarnations. Tempest is not fun unless you’re playing the color vector version with the analog spinner, and the volume up rather high– the way God (or at least Dave Theurer) intended. Mad Planets is another one of those “original or nothing” beasts. And I literally got a blister from playing The Grid, Ed Boon’s 6-player deathmatch game that never came out for any home systems. XBLA would be perfect for it…

I was also stoked because for the first time they had a trivia contest, much like World Series of Pop Culture but several magnitudes geekier. Everybody I’d hoped to meet and play with had not arrived, so I joined up with two other mercenaries looking for a team and we formed…The Mercenaries. Mike was a pinball expert, Thomas was a vid guy, and I thought I straddled the line, leaning toward vid. Well, I wound up answering (or not answering) the pinball questions, and Mike wound up getting stuck with vids — so we lost quickly (but not as quickly as the team that had shirts printed up). But it was great to be among my people.

Every year, I see something I’ve never seen before or play a game I’ve never played. This year, two weird ones caught my eye. First is UltraPin, a digital pinball emulator. Basically, it’s a MAME machine with flippers, and a giant HDTV installed on its end, with a rendered, forced-perspective playfield. Pretty weird, and not as realistic as I’d hoped. I love pinball but don’t have the mechanical skills to maintain a machine, so I was kind of hoping this would kick ass. But it doesn’t, at least not yet. I could never get used to the playfield’s perspective, could never find the sweet spot to make it look real. I kept moving closer, or stooping down, figuring there is an optimal viewing angle and I just had to try to find it. Anyway, here’s a cellphone pic: 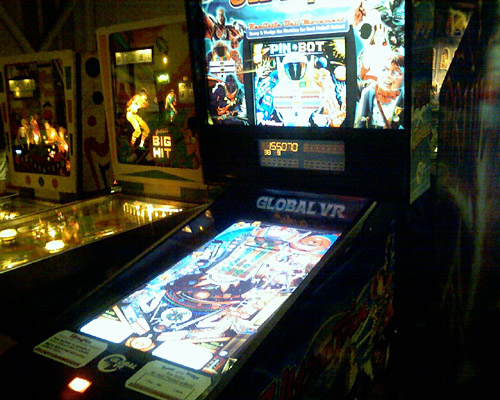 The other oddity was a hack of Tapper that changes the bartender to Moe and all the patrons to Simpsons characters. And the bandit that shakes up the beers for the bonus round? Bart, of course. A quick pic from the attract mode:

California Extreme continues tomorrow and you can buy one-day admission on site at the Tech Museum (Parkside Hall) in downtown San Jose. If you’re around these parts, please go and support the cause (and have fun). This is a total fan-based labor of love and a crucial part of geek history.