How to get rid of a lot of videogames

Yesterday was my last day at Future. Today I am unemployed. In January, I start at Activision. I am stoked.

I’m going on to an amazing opportunity; I have confidence that I am the right person for this job; I am honored to be trusted with something this high profile. But leaving Future and the Bay Area is still bittersweet; I leave a lot of friends, not to mention some unfinished business. The magazine I’ve been working on and screaming about and cursing repeatedly is not quite done and I had hoped to see it all the way through before I had to go. But by the time it ships, I may already be in LA. As soon as I have a permanent address, I am subscribing.

I’ve had a lot of kind words and well wishes and support from both friends and total strangers. We had a special guest on my farewell episode of KOXM and the gang at TalkRadar completely surprised me with a full-on Friar’s Club-style roast. I was honestly touched by both, and not in that inappropriate Chris Antista way. It’s just really a beautiful thing to know that you are valued before you die.

But now I have been moved, I have to actually, you know, move. Kat has taken charge of the move and we’re about 50% there now, with boxes sealed and ready to be loaded onto a truck. But I also realize I can’t (and shouldn’t) take everything. I am selling a few of my coin-ops (Tetris with several other puzzle PCBs is still up for grabs for $400) and I had a crazy portable garage sale for a lot of my old-school games, which the Radar guys were only too happy to attend. 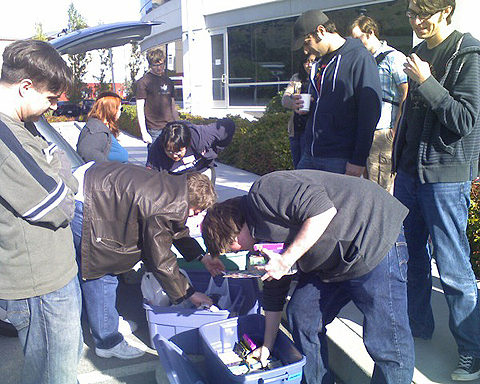 At $10 a system and $1 a game, I moved about half the stuff, some of which went all the way back to my very first reviews (Total Carnage for SNES was the first freebie I ever got in the industry…in 1993). But it honestly felt good to know that selling my Sega Saturn to Brett Elston meant it was going to be USED. I figure it was like modern archaeology to them; they’d heard about things like the Odyssey 2 and Neo-Geo Pocket Color, but here were the artifacts that they could hold in their own hands! So it’s really true about wanting it to go to a good home. I know the Radar guys will enjoy them and turn them into Top 7 lists for many years to come. Everything else that did not sell was donated to charity.

Many other small things were put on the “free table” at work — books, games, toys, lamps, you name it, if it was not necessary to take with us, we passed it on. It was surreal to see many of Kat and my action figures — which had been bringing nobody joy sealed inside Rubbermaid containers in my garage — scattered around the desks of my Future co-workers. Purging this stuff (which I have really enjoyed owning) is good for the soul and good for the aching back.

I’ve had a lot of questions about what happens next and I have some of those answers, but I’ll save those for another post.

This entry was posted in Etc, Games, Geek. Bookmark the permalink.