I was very happy to see that the 40-page free sample of the World of Warcraft magazine was posted online at last. It was hard working on that project and not being able to show anybody what was taking so long, but nothing could be displayed until Blizzard had approved it. Now that they have, I figure the files have shipped to the printer and the physical magazine should be winging its way to mailboxes (including mine) by early January. Big props to Ryan Vulk, Josh Augustine, Julian Rignall, and the rest of the Future Plus team for weathering the storm and making it look awesome in the process. I think people who actually pick it up and give it a chance will be very impressed. 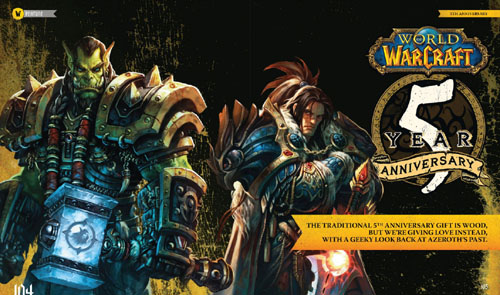 A few sites picked up the story, and as usual, most of the reader comments on those stories were the same tripe I’ve seen over and over again whenever any blog reports on any magazine. In Kotaku’s user comments, Azures said, “The internet makes them pointless on the most basic level. the internet is killing newspapers, im shocked ANY magazine is still around.”

I was going to post a long response over at Kotaku, but I’ve decided I would rather ramble and look like a crazy person on my own turf.

Like Mom always told me, “It’s not what you say, it’s how you say it.” It’s not just about getting information, it’s about the form that information takes. This applies very strongly to magazines vs. newspapers vs. the Internet. Magazines approach info delivery very differently, but I think newspapers and the Internet share a lot in common with their approaches.

Newspapers were traditionally about getting info fast — so fast, in fact, that for years many papers had multiple editions each day. But if your main product is black text on a white background, as close to instant as you can manage? Yeah, the internet trumps newspapers. But magazines have always been more about entertainment and presentation, something newspapers only did in the Sunday magazine section (note the name!) and the Internet has not quite been able to replicate yet. (Have you ever seen a website that looks like the above — not a home page, but a web page that rich, built to be consumed/read/looked at just once? No, but you’ve seen scans of magazine pages that you can download from websites — proving that people still want the content experience of a magazine, regardless of its business problems.)

In fact, I’d argue that newspapers have had more problems with “the internet stole our immediate content” and magazines have had more problems with “the internet stole our advertising dollars.” Those dollars support the purchase of paper and cover manufacturing costs, so when that well dries up, so does everything else. Most magazines’ editorial content was not so much at fault. As I’ve said before, EGM wrote great articles but died because of poor business decisions by the bean-counters. So…where do newspapers fit into that fiscal reality? They don’t. Azures is using a classic slippery slope fallacy with “dead papers means dead magazines” when they are more or less unrelated.

I see so many magazines on so many topics at my local newsstand/bookstore/supermarket — but people seem to think that when they stopped reading their old standard gaming magazine that magazines as a whole ceased to exist — and what’s more, gaming magazines can never can exist again. Not even if they try a new approach? Not even if they target exactly what they’re doing to their specific audience? Not even if they have basically nothing in common with the magazines that have gone out of business? It’s just gamers living with blinders on again. It’s easier to assume a bleak future than to investigate a challenging present.

This entry was posted in Games, Geek, WoW. Bookmark the permalink.