What to do when your Ghostbusters pack isn’t good enough

When I finished writing Critical Path, I wanted to get myself a nice big milestone gift to commemorate the achievement. That usually means “guitar,” but after looking, lusting, and playing for a few months…nothing wants to go home with me right now, and that’s okay. I have a fantastic collection and I enjoy rediscovering different parts of it. 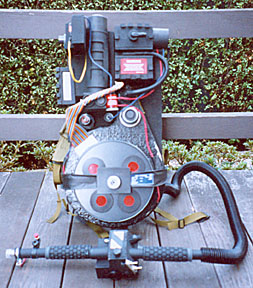 My Ghostbusters proton pack, however, is on its last legs, and I’ve considered replacing it. Built in 1999 (mostly by the ever-crafty and resourceful Kat) and battered in the years since (the pack, not the wife), it looks every bit of its 13 years of age. I didn’t know what I was doing, I made a lot of mistakes, there were no lights and sounds — it looks neanderthal by today’s standards. The GB prop world has advanced dramatically since I built mine; now there are LED lights and sound effects kits, resin reproductions of specific fictional parts, fiberglass shells, you name it. It’s all very intimidating and expensive and, having walked the path once, I’d rather just pay someone else to build one for me now. Believe me, I respect their talent and effort.

When Kat, Andy, Jason and I made our packs, they were about $300 to $350 each (most of which came from my pocket, for things like tools and shared materials and whatnot). A few months ago, I asked a local GB how much it would be to have him build a new pack for me. He said if I didn’t want a “hero pack”using the same exact parts used by the folks who built the originals for the movie, I could get one with a shell and reproduction parts for $2500…maybe. Oof. Mine is literally made out of old 35mm film canisters and a cake pan. Even though I love Ghostbusters and love being known as “that guy with the GB outfit,” I couldn’t justify that price, even for a one-time luxury purchase. (And do you have any idea what kind of high-end guitar $2500 will buy? The kind that will go up in value in the exact way a homemade proton pack will not.)

A few months ago, several friends sent me this Etsy link from Viking Props, which was also picked up as a neat thing to see by sites like Geekologie. And only $850? Hmm…what’s the catch? I inquired and found that his upgraded lights and sounds version would be $1500. Still more than I’d hoped to pay for a game of dress-up, but again, I respect the effort and detail, I don’t want to do it myself, and the guy’s got to turn a profit. 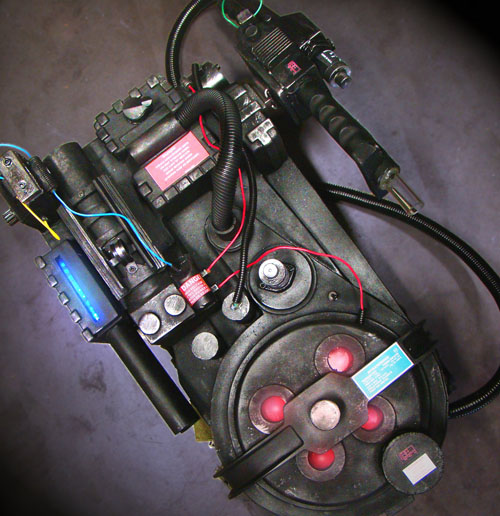 The Viking Props pack, as seen on Etsy

I turned to the Ghostbusters fan community (yes, we are legion) to see if this Viking Props guy had posted about his work, and was stunned to see people tearing him a new one. He was an outsider who had built his own plans for the pack, and you’d think this man’s design had harmed a loved one. It’s not only inaccurate; it’s a piece of junk. He left off this and that and this is different and that is wrong. How dare he call it accurate. Why people don’t just build their own is beyond me. Don’t waste your money on this crap. I don’t know why those websites gave him any attention at all. It’s a “fauxton pack.” Dogs and cats living together — mass hysteria! FWIW, if any of his critics was offering a demonstratively better pack for the same price, they would have gotten a big “shut up and take my money” from me right away. But I didn’t see anybody else saying “Buy mine instead” — just bashing his work, praising their own, and extolling the virtues of DIY. They even went out and left nasty comments on the websites that gave his Etsy page extra attention. It all went against the positive, inclusive vibes I’ve always gotten from the GB community. Guess I’ve been away too long.

Upon closer inspection, there definitely were a few details out of place and some visually distinctive parts were missing. (I will leave you to play Spot the Difference.) So I politely spoke to the builder over the last few weeks and discussed those missing bits. He said he was updating his design anyway, based on fan requests for the items he’d overlooked, and would happily add them for me. I think his pack design may still be evolving, which would make sense since he has built it from his own plans and research. 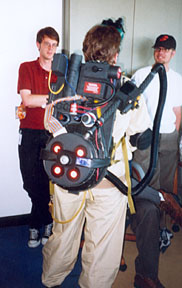 His pack, while not 100% accurate, is significantly better than the one I cobbled together from Paranorman’s plans in 1999. Yet every time I wore it, people would scream “Who ya gonna call!” with a big grin on their face. I have gotten compliments that I did not deserve, solely because seeing the pack made people happy. And it made me happy, too. Nobody noticed all the things that the pack wasn’t — they only saw this real-life thing from the funny movie they remembered fondly and it made their day. For that moment, we both just loved Ghostbusters. Ryan McCaffrey, who for many years drove a DeLorean, reported the same behavior — everywhere he drove, he met smiling strangers.

That’s what it comes down to, for me. My 1999 pack was built as a testament to one of my favorite films, and I think in the meantime, people have started building them as a testament to themselves. Being movie-accurate makes them happy. But being a public fan of Ghostbusters makes me happy.

In the end, Viking Props offered me a discount on a pack with upgraded lights & FX and he even offered to add in the missing parts that concerned me, so…I have one on order. This is my Critical Path reward, and I look forward to geeking out and having fun with it at any opportunity I can find.

The question is…do I want to wear it out in public and be associated with the petty, elitist, and bitchy people who now define themselves by the proton packs they wear?

Yes, I do. Because bustin’ makes me feel good.