I finally caught up on Mad Men and Dexter. I’m going to tackle Walking Dead S2 next, and then Breaking Bad from the start, and hopefully House of Cards. There are too many good shows and not enough time to watch them all. So allow me to make things worse by bringing up some of my favorites that I cannot recommend strongly enough. I’d like to go in order of difficulty to locate: 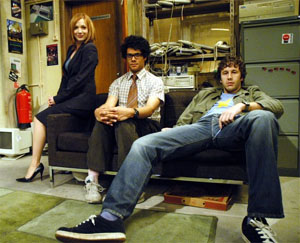 Geek culture on TV is tough to portray. I love The Big Bang Theory and appreciate that they sweat the details; some friends hate it and call it “nerd blackface,” saying it’s more mocking of geekdom than celebrating it. I have not heard such criticisms of The IT Crowd, a BBC sitcom starring Chris O’Dowd, Katherine Parkinson, and the scene-stealing Richard Ayoade as the IT department at a large company, run by a succession of clueless, sexist, and generally bizarre people. O’Dowd’s Roy is an enraged slacker who has no luck with the ladies; Parkinson’s Jen is just trying to hide that she knows nothing about computers; and Ayoade’s Moss is the stereotypical antisocial, obsessive, brilliant, glasses-wearing nerd — but he does it with such grace and commitment that it never comes off as offensive (and Roy always treats him like a human being, which helps the audience empathize and respect him). Matt Berry deserves recognition for his portrayal of the cluelessly offensive, lecherous boss — picture David Brent with an uncontrolled libido to go with the outsized ego. The comedic scenarios are so deliciously awkward in that British way (S2E1 is particularly cringe-worthy) that I am thrilled the US remake fell apart. I’d rather savor the original 24 episodes instead.

You can buy all four seasons on DVD here in the US, or stream them via Netflix. The one benefit to the DVDs: the 8-bit videogame-style menus of each collection are elaborate references to the plots and situations of the episodes themselves, but you won’t appreciate them until after you’ve watched the shows.

A lot of people don’t realize that The Naked Gun movies starring Leslie Nielsen were actually based on a TV show starring Leslie Nielsen. Right after Airplane! was a hit for the Zucker/Abrahams/Zucker team, they got a parody of cop shows greenlit by ABC. Despite good reviews and almost the same exact approach to humor as Airplane! had applied to disaster movies — sight gags, groaner puns, brutal skewerings of genre tropes, and callback jokes that rewarded viewers who had been paying attention each episode — the network canceled it after its initial six-episode run. Why? Said ABC president Tony Thomopoulos: “Police Squad! was canceled because the viewer had to watch it in order to appreciate it.” Naturally, it was nominated for two Emmy awards and spawned a massively successful movie franchise, proving that network executives are clueless assholes.

All six episodes are available on one DVD for $15, or you can rent the disc from Netflix, but it’s not available for streaming. 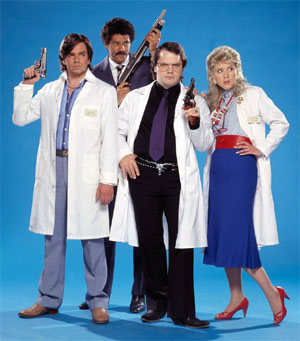 Imagine a syndicated horror drama created by Stephen King in the 1980s…if Stephen King were a megalomaniac. Imagine Stephen King casting himself in the lead role of a heroic doctor in a haunted hospital who, in addition to saving patients’ lives, also fights the forces of supernatural evil and fancies himself as an action hero. Then imagine that show having no budget whatsoever and its creators having little care for things like continuity, editing, or acting. Now imagine that show being presented as a lost classic by the megalomaniac writer/director/producer/actor, who inserts documentary interviews of himself describing his own underappreciated brilliance in the middle of the terrible episodes. The concept is so high you might have trouble seeing the ground, but Garth Marenghi’s Darkplace is absolutely one of the funniest things I’ve ever seen. Matthew Holness, who plays the fictional before-the-title megalomaniac in question, may look familiar if you remember Simon the IT guy from the UK Office in season 2, berating Gareth about Bruce Lee film titles. Matt Berry from The IT Crowd plays the overdramatic macho best buddy Rick Sanchez, while a pre-Moss Richard Ayoade plays Garth’s manager and business partner Dean Lerner, who is cast in a major role in the series despite being completely unable to act. There is a beautiful, sick art to seeing an extremely talented actor intentionally fail at his craft, and thereby succeed. The quick jokes and intentionally poor execution makes this show hard to simply describe; you must, must see this for yourself to appreciate it.

Unfortunately, it’s not on Netflix, and the only DVD release is a Region 2 set in the UK; the six episodes aired briefly on US TV and have never been seen on these shores again. But even if you have to get the R2 DVDs and rip them to watch on your iPad, I am telling you…it’s worth it.

This entry was posted in Movies & TV. Bookmark the permalink.