So we ordered vinyl flames for the PT. We got “Ghost Flames” in gray, understanding that they were “transparent” and had a gradient fade effect to gray. I mean, that’s certainly what it appeared to be from the website. Nope: In reality, the decals had no fade effect, and although light does pass through, if it’s got about 60% color pigment to it, I wouldn’t call that transparent; I would call it non-opaque — or better still, tinted. But we decided we’d try it anyway. We figured it would still look cool and subtle.

We went with fender flames, so as not to put something on the whole car right away. They were a little more affordable (but still pretty pricey for what we were doing) but, alas, nearly impossible for us newbies to put on correctly. After testing with a very small decal that was included for free, we did one of the big fender flames and it turned out like this: 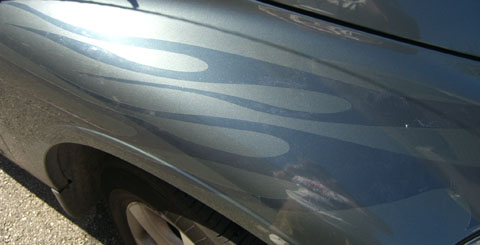 …which actually looks pretty good if you’re looking at it from a safe distance, like over the internet. But in reality it was a bubbly, stretchy, poorly-affixed mess, coated in soap and bits of backing paper — everything that looks like an imperfection in that photo actually is. We even scratched the car cutting the decals while they were in place. Verdict: These would look great if you knew what you were doing, but we suck. After realizing that the worst vinyls you can put on your car are ones that look like shit, we ultimately removed the flames altogether, after which both decal and applicator looked sad: 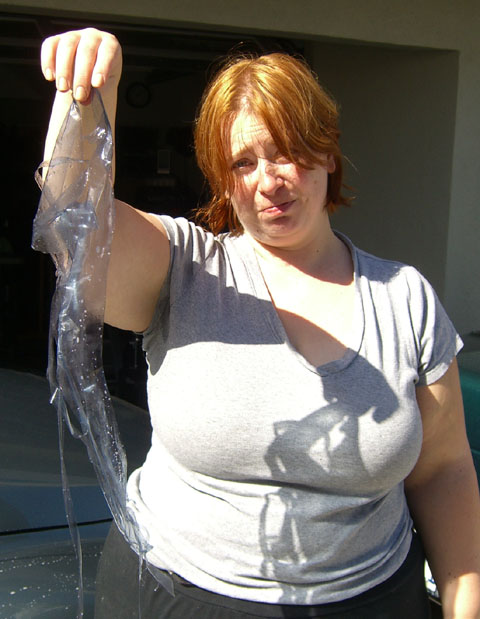 The folks we bought the flames from were nice enough to send some extra smaller decals for free/for fun/to ensure repeat business, and Kat admitted that the flames I bought were larger than she expected anyway, so we decided, since we’d learned the hard way with the bigger decals, why not just use the little ones in their place, which would be easier to apply and even more subtle? 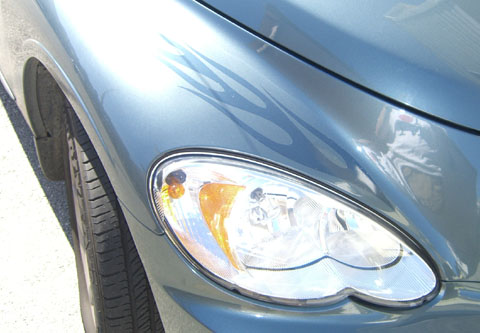 And you can see that there’s still imperfections and nicks and bubbles and stuff, but I think we got it as good as were are going to be able to get it. Seems like applying vinyls comes with practice, and at these prices (the flames, with shipping, were about $100), um, I don’t intend to practice a lot. We will live with them a little bit and see if we like it. She’s an art director and I’m just picky, so neither will blame the other if we suddenly take soap and water to the thing and remove it (they do come off perfectly clean). We like them; we just wish we were better at putting them on.

We are still entertaining the idea of having the whole car painted. Whether that would include flames, I don’t know.