So Kat wakes up one day and says, “Ow, my back hurts.” And I say, “Huh, sorry about that.” And this repeats for two months until she convinces me that the only way I’m ever going to enjoy being in bed with her ever again, on any level, is to replace said bed.

We went to Sleep Train (Your Ticket To A Better Night’s Sleepâ„¢) and were greeted by John. I said, “We were thinking of buying a mattress.” He said dryly, “You’re in the right place.” I looked at the prices of the matresses and wondered if maybe there was something, you know, on last-year’s-model-showroom-floor-sample clearance or something. Kat reminded me about the fun-ever-again thing. And she does the finances anyway; if she says we can afford a bed, we can afford a bed.

We did the completely worthless “let’s lie on our backs like we never do, and keep our shoes on, and make a decision that will last 10 years in the span of 15 seconds” thing. The Sleep Number thing is wild — one side of the bed can be super-squishy, the other side rock solid. And did you know Vera Wang is making mattresses this year? Bed technology is gimmicky.

Kat likes the Tempur-Pedic pillows. If you’re unfamiliar with them, they have funny shapes and funny smells and have the color and consistency of cheesecake. They’re expensive and Swedish. Since the rest of our home is outfitted by some oak and some pine and a handful of Norsemen, I’m not going to question it. I mean, look at how fucking happy that lady is.

So Kat looks around the store for an enormous piece of cheesecake and says we should lie on it and then buy it. We do, but I insist on the firmer Rhapsody rather than the squishy Classic. John cut us a deal on new funny-shaped pillows with raspberry sauce and graham cracker crust.

Sleeping on it is weird. It feels like it’s sucking you down; if you are not a restless sleeper, you wake up in a little pit shaped like yourself. It also smelled toxic for a week, but I wisely planned a business trip during the stink-out time. 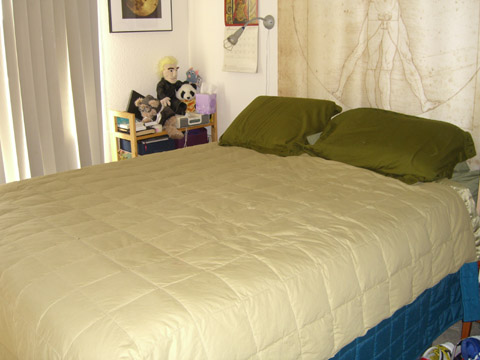 …which is more or less what it looked like before. But thanks to the Sexually Adventurous Option Package, it has an adjustable robotic base that twists the mattress into funny shapes. So sometimes it looks like this: 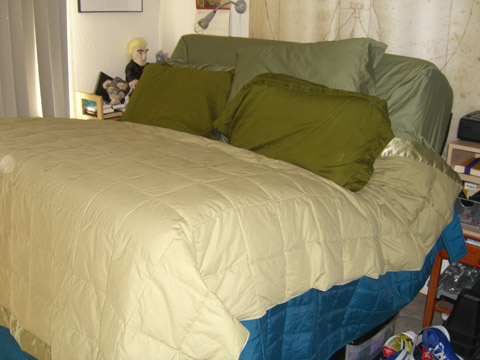 …which is just as comfortable as it appears. It took two burly men an hour to get the whole contraption up the stairs and installed.

The point is, her back and my back feel better now. And now you know I sleep with a picture of a guy’s wang over my face every night.