A few weeks ago I mentioned that my holiday haul included several cool parts for a Fender Esquire GT I’ve been wanting to modify — improve the looks, mellow out the tone. A reader even contacted me to see how it was going, and I promised I would blog about it when I got it done. It’s a simple design, as you can see — half the wires that come out of the pickup will just be terminated as ground wires. Famous last words on the previous post on this topic: “Hell, it’s only one pickup with one knob — how hard can it be, right?”

Well, I made it difficult.

To begin with, I got all the necessary parts…except for a jack plate. I wanted it to be chrome, not this “smoked”/”black chrome but not really black” thing. Ordered that. Okay, not a perfect fit, but fittable with some bending. I took off one of the tuners to find that the Sperzels did need a different hole to fit in, and the more I thought about it, the less I wanted to drill. So I found some real Fender tuners on eBay for a good deal and I’ll save the Sperzels for another project, or maybe sell them if a project never presents itself.

The Fender tuners didn’t fit either. And it’s a Fender. But those tuners were form the real American guitars, and the tuners used on this Korean-built model were a little cheaper and had very similar mounting pegs — certainly to look at them you wouldn’t know the difference from an eBay posting. But sure enough, they’re taller on the Fenders (left) than they are on the stock smoke ones (right):

I asked friends at RRC and someone suggested the smoke color might just be plating — some metal polish might make that grimy look come right off. And it did, with a minimal effort. Check it out — the left one is what I polished and the right one is the stock color, already starting to tarnish. 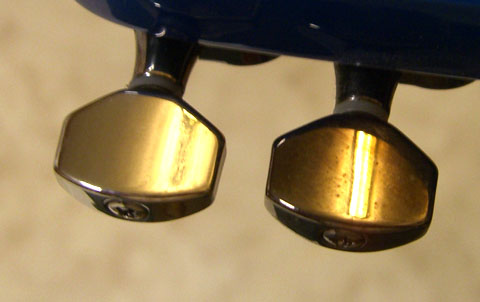 Of course, at this point, I’ve already bought all new chrome parts for everything — and twice for the tuners! — but that’s lesson #1: I could have just polished away most of the things I didn’t like. Tuners…done.

Took off the bridge and dropped the new one in, direct replacement, no problem. Studied the position of the saddles before, set the new one to match so I don’t have to mess with the intonation much. And when I looked at the old one, I see that the plating has already started coming off from where I rest my hand. Wish I’d noticed that sooner!

But still, I don’t want to strip this thing unless I have to, and replacing it is fine. Bridge…done.

String trees, knob, and jack plate are all simple enough — unscrew one, screw another on. I have a bit of a custom guitar knob fetish, and the new one was a huge visual improvement. 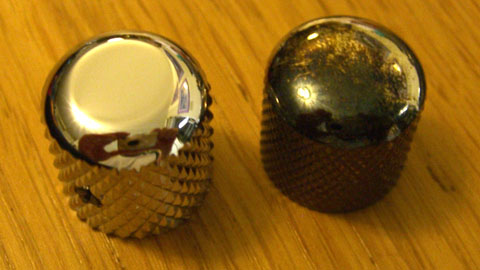 The trees were upgraded to the nice roller style intstead of the t-claws, which I dislike. And since it still doesn’t fit quite as snugly, I will probably find the old one and polish off the smoke and keep the hardware original. So string trees…done.Â  Jack plate…almost done.

The pickup and the mounting ring seemed simple but I was nervous. I’m taking out a Seymour Duncan SH-8 and putting in an SH-4 — same wiring diagram and the same manufacturer. Can’t ask for easier, and even though I had the wiring diagram, I could have just looked at what was in there when I opened it up and made sure my new wires looked the same. The only thing I note is how much smaller the new pickup is compared to the monstrously magnetic old one.

Got the mounting ring on with some trial and error and…could not find my soldering iron.

Went to hardware store. Got new, small, cheap battery-powered soldering iron. I suck at it, so let’s not get more power than I need, right? Problem is, it says it is 700 watts or so, but it doesn’t get hot enough to melt the existing solder. I get everything installed up to the point of the guitar actually making noise again — I soldered a weaker connection fine but failed at dislodging the old solder point. Argh. But I did manage to change the guitar’s look from this: 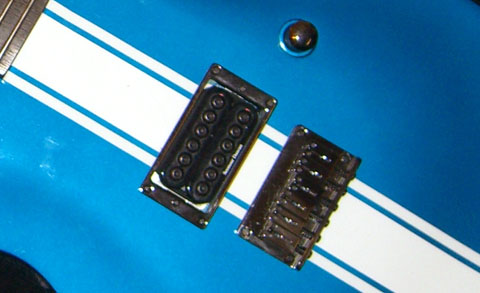 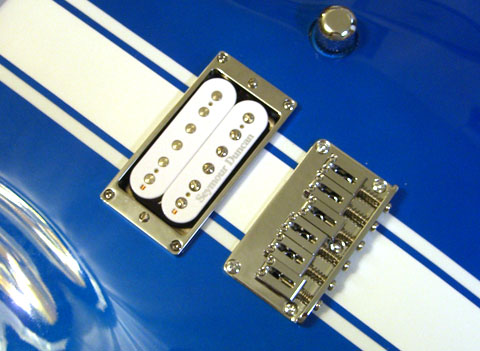 And I think that’s good.

Kat needed to go to the hardware store the next day so she picked me up another, heavy-duty soldering iron. 950 watts, woof woof. I plug it in, it heats up, and that solder goes SPLAT. Awesome. I stick the new wires on, run upstairs to test it (tapping the pickup, then just one spare string) and…nothing.

Well, something. I get hum. I crank the amp and get a tiny little sound. But something somewhere is not working, not wired correctly. Something is broken or cold or connected wrong. But when I plug in a working guitar, it’s clear that there’s a huge problem. And the volume knob is hot to the touch; did I ground it wrong? No — I just got that thing SO HOT and there is so much solder coating the back of it now that I may have destroyed it. It’s a cheap potentiometer — $2 to $10 depending on how fancy you want to go — but it’s not functional in the meantime. RRC once again advised on how to figure out where the problem is with a multimeter, and if it’s the pot, I’ll need to order a new one.

This is just another example of me not being able to create anything that isn’t made of words. I find it very disheartening. I can build a PC but I can’t wire a simple circuit. Why?

UPDATE: Some friends at RRC advised on how to sniff out the problem. I didn’t ruin the pot, but I did snap one of the wires from the jack. Installed a new jack, now it works…but I still think it might be a little noisy, and I suspect there’s a grounding problem because there’s a small tick sound whenever I touch a metal part.Â  I feel like it’s 95% of the way there.

UPDATE 2: I took it to Greg and he fixed the grounding problem for me. What can I say? I need help. But the guitar is exactly what I wanted it to be now — it’s epic in all respects. W00t!