First of all, I just figured out that there was a way to automatically update WordPress with a plugin. I got tired of manually updating around 2.6, but smart people have been using it for well over a year before that came out — and of course, 2.7 has a built-in auto-updater, which I also never saw by camping on 2.6. I am happy to say that this site, Kat’s site, and Palette-Swap Ninja are all now 2.8 and good to go.

That auto-updating plugin saved me so much time this weekend that I was able to go outside. Yeah, outside! Andy caught me on videophone doing the fire juggling thing (you know, for kids) at Paul’s house Saturday night, but before that, Kat and I got some archery in. 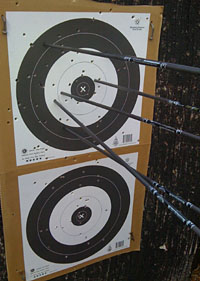 Being medieval geeks we’ve always been keenly interested in archery. I shot in high school gym class and I remember using strong recurves, like 45# bows. One kid in the class brought his compound bow, and I remember thinking that was cheating — like, way to overengineer something so insanely that skill is no longer a factor. Pulleys, stabilizers, laser sights…what happened to skill? If every quarterback augmented their arm with bionics and fitted the roboball with a high-frequency transmitter that guided it to the gloves of the literal reciever, people would give up on football. But you do that with archery, and it’s progress. Modern compound bows look like Klingon weapons — or worse, guns, which strikes me as missing the whole point. I know it’s for hunting and all, but wow.

Some years back Kat found some used recurve bows (online? locally? no idea) and they’ve sat in our garage for ages. Seems that the local parks and recreation divisions don’t much want you to pull out a bow and arrows in the local park, so we didn’t have anywhere to shoot. Kat found the San Francisco Archers had a public day for guests to come and check things out, so we grabbed our gear and fell in love again. Problem was, our gear was not for us — neither one of us could control our 35# or 38# bows, and we wound up using a loaner 25# instead. Since we didn’t really like our 35# anyway, we’re going to sell it, but we’re hoping to grow into the 38# over time.

I then spent the next week or so looking into gear, because we both had the bug. What size bow? Aluminum, wood, or carbon arrows? How long should they be? Do you cut to fit the bow? What kind of fletching? What’s the proper draw? It was all kind of baffling; most archery sites online assume you know everything already, which is rather inconvenient for beginners. I learned that our outgoing 35# is a bit of a vintage item — apparently a 1961 or 1963 of a major brand, and it’s still quite shootable — so that might bring better money as a result. But I also found a lovely starter takedown recurve with a dumb name for just over $100 and took it to Pacifica Archery to get setup advice and some cheap carbon arrows.

And Saturday afternoon, we went to the SF Archers’ guests-who-donate-are-welcome outdoor range. 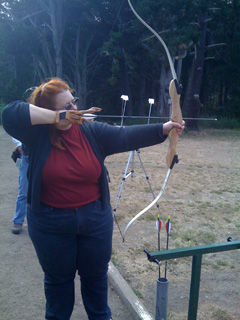 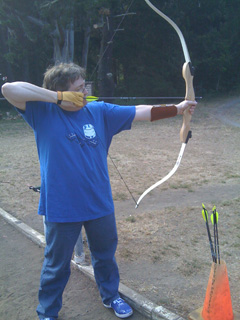 Okay, now we know whose draw is longer. For whatever reason I pull back a minimum of two more inches than Kat does on the same bow, even though we’re the same height. Guess my arms are longer.

Archery is an awful lot like bowling. I’m serious: It’s a sport where physics and accuracy are more important than athleticism, where middle-aged guys with moustaches spend too much money on esoteric equipment, and everybody wears camo and Harley-Davidson t-shirts. Also, after about an hour, my arm gets fatigued and I have to stop.

Those carbon arrows were cheap; one of the tips came off already, but it will be easy to repair. And we both liked shooting, so I am glad to have something to do outside. Also, I’m not great, but I’m not as bad as I feared I would be, even with the rogue eyeball. So that’s always nice — feeling like you’re competent at something.

Really, I just desperately needed another hobby. Seven was not enough.

This entry was posted in Etc, Geek. Bookmark the permalink.