I finally caved a few weeks ago. I was looking for an excuse to get one last year but could not find one, but the price drop and redesigned new unit were enough to push me over. Kat (who actually did go so far as to get one for me, but I returned it in price protest) has been a little resistant because she doesn’t want to support Blu-ray; the only reason it exists is because Sony forced a format war after the DVD Consortium had already chosen HD-DVD as a standard high-def format, and she hasn’t wanted to reward them for that shitty nightmare consumerist behavior — and I agree. But…both Firefly and Ghostbusters came out on Blu-ray. And there are a bunch of exclusive downloadable games I wanted to play. Also, the slimmer unit looks less like a Foreman grill. And besides, as a lifelong gamer, I hated not having one of the major systems.

Since Metal Gear Solid is not my style, and LittleBigPlanet is a platformer-player’s paradise but my personal definition of Hell, I went right to the PlayStation store to get a few of the downloadable games I’d been eager to play. Unfortunately I could not buy them. My PS3 “Wallet” didn’t like my credit card information — the same information I used to buy the PS3 itself, mind you — and locked me out of even trying to set up a Wallet for 24 hours. I poked around online and found that this is a well-known bug; apparently, if you have a tricky address — such as, say, living in an apartment — you have to enter your address exactly as your bank has it. That means that even though Sony gives you three lines for your address so you can put your apartment number on the second line, you actually will screw yourself if you do. You have to put it on ONE line. And does your bank have you down as “Apt 3” or “#3” or merely “3”? If you can’t check some sort of bank statement, here’s hoping you’re a good guesser.

While locked out, I downloaded PlayStation@Home. I love Snow Crash and have been very impatiently waiting for its Metaverse to become reality. I downloaded it and found that my guy didn’t really look anything like me; it was weak on customization. I was surrounded by other gamers who were saying and doing…absolutely nothing. “where r u from” and “chicago” and “kewl” abounded, but nobody was DOING anything. They were just standing around using predetermined macros like “Hello!” and “I have no headset.” I went into the shopping mall anyway to look at the Ghostbusters outfits and living space that you can buy. I ultimately did pick them up, even though I should not have. But…it’s Ghostbusters. The outfit looks good and only cost $2; based on the Avatar prices on Live, that’s less than it would be if it existed on 360, which it does not. So now I can go into Home at any time and be bored but look geek chic.

Anyway, I eventually guessed right on my billing address the next day. Others have not been so lucky; they’ve never been able to resolve it. I guess that’s why I went to three stores and found the prepaid cards for the PlayStation Store were completely sold out everywhere. It’s clearly a lousy e-commerce engine that Sony has not yet fixed. I have never had these kinds of issues with any online retailer over the last decade or so. 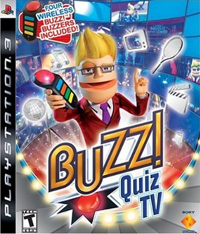 I was very impressed when I finally got some games, though. Linger in Shadows is so strange and cryptic that it won me over immediately; then again, I went in knowing it was basically interactive art and not a traditional game. Flower just makes me feel good to play it; it’s lovely to watch, non-violent, and rewarding. The only retail game I bought was Buzz, a game-show trivia setup with four wireless buzzers. Now that I have found I can make my own quizzes, I am pretty hooked. (I am also, as of this writing, undefeated when playing strangers online.)

As for movies, I already had Dragon’s Lair on Blu-ray, and we went to get Sleeping Beauty on DVD last year (while my favorite Disney character is Jessica Rabbit, Kat’s favorite is Maleficent…hmm) we found it came as a combo deal in both formats. So we watched Sleeping Beauty and it was gorgeous. Ghostbusters, Firefly, Serenity, and the most recent Harry Potter film are the only other ones we bought. I think we might rent from Netflix if there’s something we really wanna see in HD. But honestly…upsampled DVDs look really nice, and I don’t see a huge jump in most films. I know I need to see some Pixar stuff to really appreciate it, but…you know, film can only look so good, and I wonder if we haven’t plateaued.

The whole PS3 “XMB” interface is clunky to me, and most of the time I interact with the machine, it feels very isolated and sterile. I’ve gotten used to Xbox Live’s sense of a living, breathing community lurking around every interface panel. The PS3 has free online functionality but no soul.

Ultimately, though, I’ve been using the PS3 for exactly what I thought I might: protein folding. I leave it running on the Folding@Home channel whenever I’m not playing games; it doesn’t suck a lot of power since it’s the newer unit, and I have all the other machines in my house folding whenever they’re on.

So I’m digging it…but waiting for Twisted Metal PS3, whenever it might come out. I’m going to play Uncharted sooner or later, and I’m looking forward to getting the God of War reissues, since I never played those on PS2. Anything else I’m missing? I like little arcadey car games, and I see a bunch of those in the PlayStation Store, but I don’t know what’s good — Smash Cars? Calling All Cars (I generally love Dave Jaffe), PixelJunk Slots? No idea. And I can only find so many back issues of PTOM at the office!

This entry was posted in Games, Geek, Movies & TV. Bookmark the permalink.