I am an A/V badass

Our main TV setup isn’t so crazy any more (5.1, three consoles, TiVo and DVD), but the real challenge is the office. That consists of my main work/gaming PC desktop (with 5.1 speakers) which shares a 24″ Dell monitor with my Mac recording station (with its own speakers). Then there’s Kat’s Mac workstation (with speakers, multiple external drives, and a 24″ monitor), and Kat’s PC gaming desktop (with its own speakers and a 19″ monitor). Plus we share a printer/scanner and use a Mac Mini as a file server. Oh, did I mention the console gaming setup, with its own 23″ HDTV and a different 5.1 speaker setup? The office is a terrifying collection of wires, cables, and power strips. It takes a lot of methodical planning and mental double-checking of signal paths to get it right the first time.

So Kat throws me a curveball: In the new place, she wants to have live TV in the office. She’s accustomed to watching movies in a small window in the corner of her screen while she designs layouts. That’s admittedly unusual, but her faster-and-cleaner-than-anybody-else work output speaks for itself. A few stupid fuckers at Future had biases against her for this and I probably should not take the lid off that still-simmering pot of rage. So, she says, can we get the second TiVo hooked up to your gaming rig so I can have it on while you’re not around?

Then I get to thinking. These awesome Dell monitors come with a ton of inputs we don’t use. They also support picture-in-picture. What if I wire it into her Mac monitor so she can watch TiVo in the corner while working on the Mac on the same screen?

This of course means more wires and more power and more chaos, but I dutifully hook up the cable box and the TiVo and sneak them under the desk next to her gaming rig. 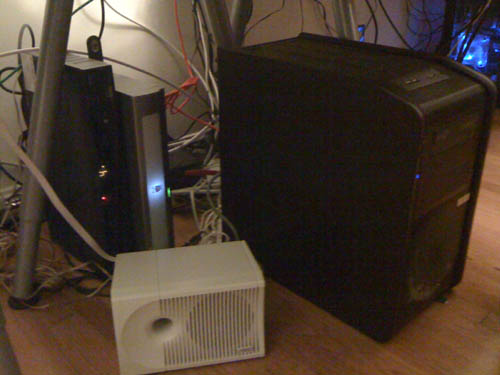 TiVo S-video out to monitor S-video in works like a charm, but I realize, I have no way to get the audio through. That little white subwoofer is actually an ancient Cambridge Soundworks four-channel surround rig that I’m only running in 2.1, so with some cables from my archive, two orphaned speakers from my previous computer speaker setup, and a quick trip to Radio Shack, I managed to wire in the TiVo audio to the PC system’s rear speaker inputs, so she gets PC game audio on “front” and TiVo on “rear.” The same volume control handles both, but she probably won’t run both at the same time, and if she does, the PC can be turned down with the wheel on her Logitech G11 keyboard. 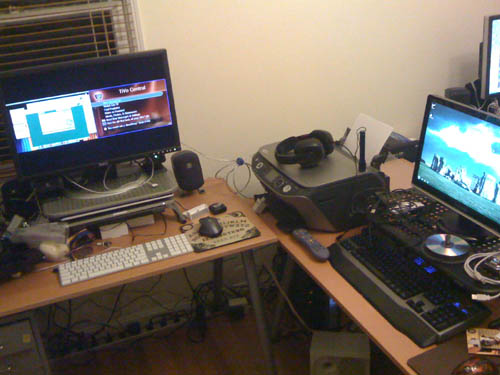 So now she can use one button on the monitor to cycle through Mac only, Mac with TiVo in a window, or Mac and TiVo side-by-side. 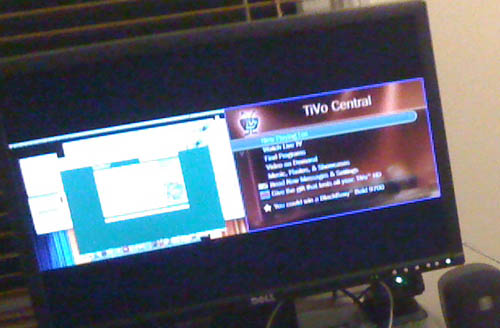 It took me two days to get everything up and running. But when it was done, I felt like an A/V badass.