Kickstarter, I shop you

As I have mentioned before, I like Kickstarter. I regularly say that I shop on Kickstarter.

According to a recent blog from the team at Kickstarter, I am wrong.

It’s hard to know how many people feel like they’re shopping at a store when they’re backing projects on Kickstarter, but we want to make sure that it’s no one.

Hmm. That doesn’t sound right at all. 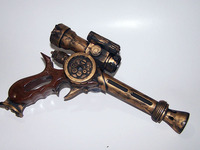 About every week to ten days, I browse the site for interesting new product ideas, and sometimes search on specific keywords. If I find it of interest, I back it. I have done this with everything from iOS games to documentaries to gadgets to live performances to electric guitars. My steampunk blaster prop came from a talented guy on Kickstarter that I never would have found otherwise. So, a bunch of products being developed that I can preorder? And then my money is taken in exchange for the product itself some months later? Yeah…that’s shopping.

The reason I shop on Kickstarter is that I like supporting the engineers, craftspeople, and innovators who come up with great ideas but wouldn’t normally be able to see those ideas come to fruition. From small bands to garage software developers, I have always supported “the little guy with the big idea.” Kickstarter lets me indulge that desire while also getting awesome stuff in exchange for my support and patience and understanding of the whole process. I will admit that at times, I have backed a fully-funded project late in its cycle because I know it’s a bird in the hand; at that point it truly is as close to a preorder as the site can offer. But I have also backed plenty of projects that did not come to fruition. I don’t regret any of that support; it costs me nothing and it gives the creator more information to head on to the next step. I am never angry when a project I back doesn’t get enough support, though I do feel bad for the creators. As a backer — a customer, a shopper — I know the risks when I click Back This Project.

Ultimately, maybe this is a question of semantics for me and a question of ideology for Kickstarter, but I find it odd when someone tells me that I’m not doing what I think I’m doing, especially in an absolute.

It’s hard to know how many people feel like they’re shopping at a store when they’re backing projects on Kickstarter, but we want to make sure that it’s no one.

Well…a correction for Kickstarter, then: It’s at least one. I am fully aware of what makes KS different and special and risky and awesome, but I am also fully aware that I’m shopping on your site. You should be aware, too.

UPDATE: In retrospect, I think I misinterpreted their blog. I have been using the site for almost a year, so I know the things I am seeing are in various stages of funding and may not ever get made. But newcomers to the site might think that everything they are seeing is real, exists, and is available for sale, like a traditional shopping site. It’s a bad choice of words. May I recommend a rewrite?

Yes, it’s longer, but it’s a heck of a lot more clear.

This entry was posted in Etc, Geek. Bookmark the permalink.