The real problem with Monopoly is you

A rather elderly blog post focusing on one key Monopoly rule that people don’t follow went viral earlier this year, leading to headlines of “Monopoly: You’re Playing It Wrong.” The author’s follow-up to the viral outbreak is worth reading as well. I am a lifelong Monopoly fan and student, and now that I’ve had time to let this topic simmer a bit, I’m going to go further still: I’m going to point out all the other things you’re doing wrong when you play Monopoly.

The biggest complaint most people have with Monopoly is the length of time it takes to play. When played correctly, Monopoly often lasts about two hours. But games last longer because people refuse to trade properties — a basic fear of risk and luck, in a game that is built on risk and luck — and they also add house rules to “make the game more fun.” Unfortunately, that’s like saying you want to drive into oncoming traffic to make your daily commute more interesting. In both cases, it upsets the natural balance of things and turns out to be wildly destructive.

The speed of Monopoly gameplay has been an issue for years, and the publisher knows it. The instructions include alternate setup rules that make the game even shorter — cleverly hidden under the title “Rules for a Short Game” in the instruction manual. In 2007, in another attempt to pick up the pace (and possibly give people a reason to buy an all-new Monopoly set), Hasbro introduced the Speed Die, but hardcore players frowned on the new random element, and it was discontinued after just a few years. (If you want to try it anyway, you can get a loose Speed Die on eBay or you can just make your own.) But even if you play with Short Game rules or the Speed Die, invoking terrible house rules will still make the game drag on.

So why do people insist on playing with house rules in Monopoly? I think it’s because they don’t actually know the real rules. Games are more fun when someone shows us how to play; we learn quickly by doing, rather than just reading. So when your family members play by the wrong rules, you get taught the wrong rules, but you learn them quickly and never forget them. Curse you, experiential learning!

So, rather than go over the real rules one at a time, I’ll be that friend who teaches you how to play by simply telling you how not to play, and which house rules not to use. Here’s the House Rules screen from the iPad version of Monopoly: 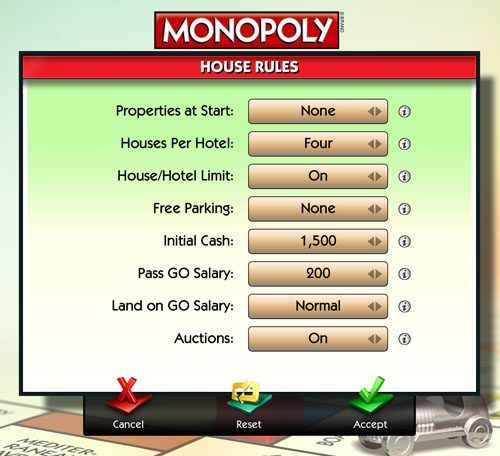 Default settings shown, with no house rules activated. Leave them that way.

Properties at Start
Dan, Can I Use It?: YES
If you want to play closest to traditional Short Game rules in the app version, use this. Here, each player gets two properties, four properties, or all of them get handed out randomly before play even starts. (Official Short Game rules give everybody three properties, but Short Games also follow a few other rules changes not covered in the app — which is weird, since it is official.) Makin’ it rain properties before the game starts essentially skips all the time-consuming dice rolling for the first half-hour or so of the game, and moves you straight to the trading part of the game, where all the fun interpersonal stuff comes in.

Houses Per Hotel
Dan, Can I Use It?: MAYBE
The rules (and every title deed) state that you need four houses to build a hotel (which counts as the fifth structure). If you set this to three houses instead of four, you’re escalating the rents faster (assuming players upgrade to hotels, anyway), thereby bleeding more money out of each other, thereby ending the game faster. So if you want a shorter game and you play with people who like hotels, go with three — but keep in mind that it also affects the next rule.

House/Hotel Limit
Dan, Can I Use It?: NO
The bank offers a finite number of houses (32) and hotels (12). You cannot buy what does not exist, so if, say, eight properties have four houses apiece on them, then you can’t build any houses on any other properties until one of those owners sells their houses back to the bank (which they will if they upgrade to a hotel, and they can’t buy the hotel without owning the physical houses first — the Title Deed specifies that a hotel costs a certain amount of cash “plus 4 houses”). The House/Hotel Limit house rule says you can buy infinite houses and hotels — maybe even buying multiple hotels for one property, ugh — but it ruins one of the classic strategies of the game, and it means people just pass the same money back and forth more often. Just keep the housing limit in place.

Free Parking
Dan, Can I Use It?: OH HELL NO
The most well-known house rule is often the most damaging: All funds that would be paid to the bank (Income & Luxury Tax, Chance/Community Chest payments, etc) go into the center of the board. Sometimes people just slap a $500 bill in the center instead. Either way, the first person to land on Free Parking gets the cash. In real life, it would be fun to win the lottery every week, but in Monopoly, random windfalls simply devalue the dollars in play. Remember, the goal is to bankrupt your opponents; you can’t do that if they keep hitting Powerball jackpots every two trips around the board and having second, third, and fourth chances to come back and defeat you. Stop using this terrible house rule immediately!

Initial Cash
Dan, Can I Use It?: MAYBE
You are supposed to start with $1500, a fair amount when you consider the prices of properties on the board. If you lower that number, you could cause people to go bankrupt faster, and if you want a shorter game, that might be a good thing. If you raise that number, you’ll probably be able to buy more properties on your first few trips around the board, but you’re just flushing the market with cash as above, and more people with more money makes for a longer game. So put the squeeze on if you want, but don’t start handing out bonus cash.

Pass GO Salary
Dan, Can I Use It?: MAYBE
Same as above. You can decide to give people more than $200 or less than $200, with the same consequences. I’d just keep it at the normal amount.

Land on GO Salary
Dan, Can I Use It?: NO
If you land on GO, you can set it to give the player $400 instead of $200. Don’t, for the inflation reasons previously stated.

Auctions
Dan, Can I Use It?: NO
This involves the “forgotten rule” that the viral blog post discussed: When you land on a property, you can buy it. If you don’t want to or you don’t have the money to cover the asking price, the bank is supposed to immediately put it up for auction — all players can bid freely, including the player who passed on it. It doesn’t matter that the bank sells it for less; it matters that that property is in someone’s portfolio, an asset to be traded or built upon. That’s the default rule and it’s how you should play. The house rule — and the common mistake — is that people decide they aren’t interested in that property, so they pass and move on, leaving it unpurchased. No no no no no. The longer you wait for properties to be bought, the longer it takes for anyone to build houses, and the longer the game takes. Never use this house rule.

When you play Monopoly the way it was designed, it’s strategic and tense and just unpredictable enough to be exciting — and it works. For one person to win, the others eventually have to lose, and yeah, it’s a drag if you are one of those people who gets knocked out early — but it’s the same as if you were in a poker tournament, or any sort of bracketed sports showdown. That’s the chance you take; that’s part of the risk. You wanna play, you risk not winning. Get out there and give it your best shot. You might lose — or you might win.

Ultimately, I think house rules involving cash circulation and player stubbornness regarding trades are to blame for Monopoly’s bad rep. Together, they lengthen and unbalance the gameplay…and the game takes the blame for the players’ own sabotage.

The answer is clear: Read the rules, be willing to trade, and play Monopoly as it was designed to be played. If you still don’t like it after playing it correctly, play something else — but please, don’t wreck it for the rest of us.