If you’re just tuning in: I built my last PC in 2008 and decided to buy one, for the first time since the late 90s. I went with iBuyPower for a few reasons: Price-shopping, they beat everybody else on the market (at least for what I wanted), and I’d spoken to two recent customers — one about three years ago, one just this past year — and both had positive things to say. I also heard “I have no reason to avoid them” from a few pros that I trust. One of those recent customers recommended I go pick it up in person, thereby saving shipping costs and potential damage, so that’s exactly what I did on Friday morning. They are about 45 minutes away from West LA, and I was in and out in 30 minutes. I then spent all night — literally, until about 4am — installing software while simultaneously rebuilding and reformatting my old PC to be Kat’s new gaming rig, so we could play games Saturday when she woke up. Since this happened right after E3, I’ve been exhausted all weekend.

So here it is: 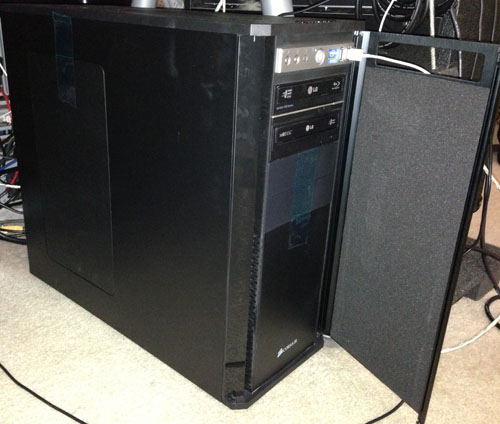 Like the man says, she may not look like much, but she’s got it where it counts, kid. I really wanted to get a mid-life-crisis case, all shiny and bright red and vomiting LED light from every pore, but my real practical goals were low noise and longevity, so I went subtle. Well, okay, monolithic — if not downright boring, especially compared to my taste in guitars (if one can even call that “taste”). Some people see something sleek and black like this and think “badass ninja,” but I generally prefer to go for “badass clown” instead. I want something that looks ridiculous but can still lay waste. I am considering a vinyl skin or stickers or something to cheer it up.

The build quality was quite neat, almost certainly better than I would have done. My Windows 7 Experience score is a 7.8 out of a maximum 7.9 (the CPU, of all things, is the part that takes it down a tick.) I am stunned to find the computer is utterly silent. Like, the fan I run in the room to keep me cool is louder. The liquid cooling means I could get away with just one rear fan plus the power supply; the side panels are all covered in sound-dampening foam, but can be removed if I want. The case is not held in place with screws — they’re just push-buttons, which is weird but awesome. I immediately added a 4-point USB card that I had lying around, and now I want another, or a 3.0 hub. I just never have enough USB ports, with multiple external drives and sync cables and all that stuff.

I was advised against going hexacore, suggesting I’d be paying a lot for stuff I would not use, even in a few years. I’m not disappointed; my H.264 encodes are still roughly 10x faster than they were, so I’m seeing huge performance gains from my perspective. Boot time is silly low and the whole system feels very snappy. This is Win 7 but my first 64-bit Windows rig; I’m trying to use as many optimized apps (VLC, Handbrake) as I can. The 650-watt power supply is actually less powerful than I was running before, but I’m not overclocking or even running a second monitor, so one GTX 670 at 1920×1200…this is fine. The energy savings on the non-OCed CPU are also likely to be significant, as I leave my machine on 24/7.

We’ll see how it works out in the long haul; I acknowledge that this is the first 48 hours and therefore still in the honeymoon period. But I’m enjoying that brief moment when you can more or less run games at max quality right after you get a new machine. And on that note, I’m off to play some games.