In the October issue, I gave Space Giraffe a very low score, 2 out of 10, and its creator, Jeff Minter, posted several strong reactions. It was the first review out of the gate, and I simply don’t think he was ready to hear negative reactions yet, let alone one that strong. I’ve since been accused of everything from incompetence to conspiracy, with a lot of nasty names thrown in for good measure. There’s even this surprising item, which a friend spotted on the official Llamasoft CafePress site. I may be demonized, but I guess my review is still good for a laugh…and making Jeff Minter a buck or two!

I’ve been reluctant to say anything about it even though there is a lot of assumption and misinformation out there. It’s a Catch-22: If I speak up to defend myself, I’d be called unprofessional. If I stay quiet and try to let my work speak for itself, then I’m clearly guilty of all charges because I’m not disputing them. It’s been tough. I’m not used to be painted as the villain, but I gotta take my lumps for my work just like everybody else. If you don’t want to be criticized for what you say, don’t say anything, right?

Meanwhile, I found it really interesting that almost nobody contacted me directly about it. I’m pretty accessible, I think. A few people let me know that there was a big forum discussion about it, but other than one guy trolling the OXM forums and parroting everything I said back to the Llamasoft forum, there wasn’t much interest in my side of the story.

For the record, there was a private email exchange between Jeff and OXM. Nothing was really resolved — I tried to respond to his points in my reply, but he didn’t address any of those points in his response. We invited him to be on our (or a neutral) podcast to discuss it, and we invited him to state his case in a special letter in Message Center, but to date, neither invite has been taken, and I don’t really suspect they will be. He’s chatted about me to Major Nelson, but doesn’t seem to be interested in chatting with me.

Despite assumptions to the contrary, I take my responsibility very, very seriously. I don’t say anything in print I wouldn’t expect to have to defend in person, or even repeat to the creator’s face. I don’t hide behind my reviews, and I don’t see them as weapons. But I don’t feel it helps either the creator or the consumer if I gloss over problems so as not to offend anyone. Reviewing a game by saying “I didn’t like it but I guess you might, maybe” is really, really not what critique is about. Without honest and specific feedback, a review is worthless. And in this case, the honesty is brutal.

I really do stand by my review. Space Giraffe is unique, which is to be applauded, but hostile to the player, which is not. It took a while to understand the game — really, even after taking the tutorial twice and fiddling with the game for a week, the game simply didn’t give me the feedback I needed to learn how to play it. And once I did get a bead on it, I didn’t like it for all the reasons stated in the magazine. No matter what else is said, that doesn’t change. And several people have come forward in user reviews and forums to disagree, and several others have come forward to agree. It’s a strongly polarizing game.

All I really want to add at this point is that a lot of the allegations and assumptions made about me are incorrect. For the record? I don’t hate Jeff Minter, Llamasoft, indie game developers, or classic arcade games. Before even playing the game, I wanted the review assignment; I was really looking forward to the game, and I spent a week with it before coming to a conclusion. I did learn how to play the game, albeit slower than I’d hoped, and when I finally figured it out, I strongly didn’t like it for very specific reasons. Before coming out with such a strong opinion, I asked three people to play the game and they all happened to agree with my conclusion; it was not a decision that was reached in haste. Pretty much everything else people have said about my methods of and motivations for reviewing Space Giraffe is conjecture.

Also, this is a minor point, but I did get one Achievement — nothing to brag about, but the fact that I got none has been a popular shot at my credibility, and my PartnerNet account has a July timestamp to the contrary. “Screenshot or it didn’t happen”? Okay, here’s an updated image straight from the debug. Anyone with PartnerNet access is welcome to confirm this if they really want to waste the time: 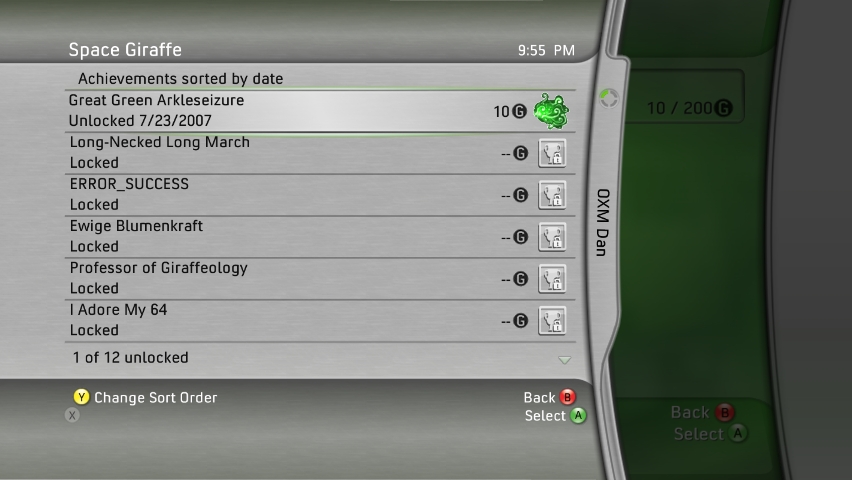 Meanwhile, I’m really glad to see that Jeff posted this on his blog:

Next time out weâ€™ll put extra work into the tutorial mode. The underlying design of the next game is just as richly complex and rewarding as SG, and I wouldnâ€™t want people to miss out on enjoying it due to an overly sparse tutorial mode.

He didn’t want to hear my criticisms when he read them, but I’m really glad to see that, as other people have brought up similar points, he’s taken the feedback as it was intended: constructively.