The search is over. I fell in love. On my anniversary, no less.

We stopped at Gryphon on the way back from the ren faire yesterday. A friend at work recommended the store so I checked out the website and found a) they were acoustic experts, so they could answer my simple questions and b) they had stuff in stock that I should not be allowed to touch or stare directly at, let alone buy. Even much of their new stock was so exotic it was instantly out of my price range. But like ordering a hamburger in a steakhouse, I figured their “low-end” guitars were still better than I was likely to find anywhere else.

In poking around the website I spotted a used 2003 Taylor 410CE Limited Edition ES. After some research, I found that 2003’s limiteds were among the first Taylors to use the Expression System for on-board electronics, plus this particular guitar’s back and sides are a not the model’s standard ovangkol but imbuia, neither of which I knew anything about. It was also a dreaded dreadnought but I figured, hey, since it’s used, it’s actually well within my price range, and it would be worth playing if it were still there when I made it to the store. It was, so I tried it first.

I played it and Kat cried.

No, not because I suck.

I tried several other new models including OM Martins, two cedar-topped Taylor GS models (while very pretty with a great tone, it was biggish and simply wasn’t “mine”) and the Taylor 414ce and the (out of my budget) 514ce, which both felt comfortable but didn’t have that intangible, I-can’t-put-this-thing-down factor. I kept going back to that used one and it always sounded better than whatever I’d just played. I did not expect to buy today but I was ready to buy if I found The One. For me, this is unquestionably The One. 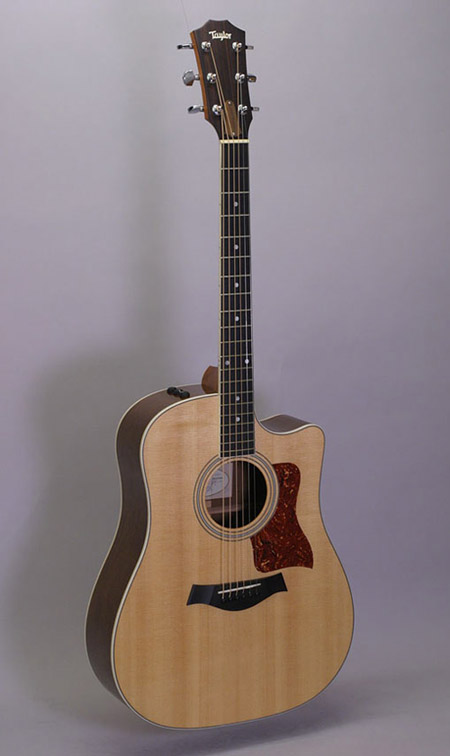 (Yes, that’s my actual guitar, as photographed by Gryphon.)

Other people online have described this guitar as particularly “balanced” in tone and I gotta join the chorus. It has the all-important balance that I could not find on other guitars, which seemed either best suited for fingerpicking or strumming, but never both. This responded perfectly to whatever I played, with none of the traditional dreadnought boom yet plenty of warm volume when strummed and sweet articulation when fingerpicked. The neck is a very managable C-shape and while my tiny hands know they’re holding wood, it’s not uncomfortable. The spruce top is slightly figured, as opposed to the plain, boring spruce I’ve seen on a lot of other instruments. And the Expression System is so subtle it practically hides–three little knobs on the shoulder for the electric bits with an endpin jack. It’s still an acoustic, just with a secret superpower.

What’s more, “used” apparently means “the previous owner played it maybe three times.” I could see some minor scuff marks on the pickguard, but only when i tilted it toward the light, and I might have put them there in the store for all I know. It came with a hardshell case, an extra set of strings, and they threw in a cool t-shirt, all for far less than I had expected to pay and with more of my optional features (the “ce” means “cutaway” and “electric”) than I expected to get. Originally I think it listed for about $2300 and retailed for $1800ish. So, good deal no matter how you slice it.

I dreamt about it last night.