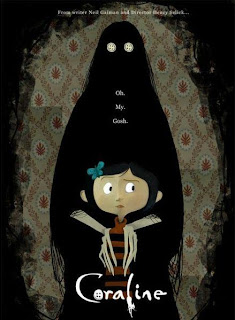 Got to see it yesterday; my comments will be spoiler-free. Very good, very creepy, and very happy to have a dark animated film to take the place of the wildly overrated Nightmare Before Christmas. That it’s from the same director is even better; can all the wanna-be goths finally let go of Jack and Sally and all those annoying songs? Sorry, I really like Oingo Boingo, but I am not in the Skellington cult.

I saw Coraline in 3D, or rather, I saw it in spite of 3D. I did not realize I was going to a 3D showing, and my mutant eye condition makes it very difficult for me to see 3D images. Stereograms are impossible, red/blue 3D is tricky at best, and the polarized stuff, like the Kodak theaters at Disney and Coraline‘s True3D, are actually my best bet. But going to the show at the end of the day and being tired did not help. Those without ocular barriers may find it quite pleasurable. Even in 2D, watching out of one eye (which is kind of how I see the world, truth be known), this film was fantastic and unsettling all the way through. And despite excellent orchestral music, I could not get “Creepy Doll” out of my head the whole time.

I admit that what really made me want to see it was that it was based on a Neil Gaiman book. This interview with the director shows what good can come from the adapted work’s original creator is truly on board with the film version. I think Gaiman’s healthy “it’s your thing now” attitude can only result in a better product. I mean, can you imagine a Sin City movie without Frank Miller involved? Good or bad, that was how the Sin City movie had to be done. (I liked it a lot.)

And that makes me weep for Watchmen. What if Alan Moore had really embraced the opportunity? What if he wasn’t being an unreasonable ass about any translations of any of his works? What if he could consider this the way Gaiman did — a retelling that needs to be sculpted for the medium — and not just sit at home, rejecting and condemning everybody who wants to bring his stories and characters to a wider audience? I am hoping Zack Snyder gets it right — I’m really concerned about the casting and character performances, more than anything, because Nite Owl and Ozymandias look too young and too hammy in the trailers — but I would not have to hope so much if I knew Alan was involved. And it’s not like they didn’t want him involved.

I know Alan, Frank, and Neil are all friendly. Wish they’d have lunch over this one. Meanwhile, go see Coraline.