It’s good. It’s not great but it’s certainly not the disaster that some reviews made it out to be. It was more or less what I expected it would be: respectful, glossy, and co-dependent. 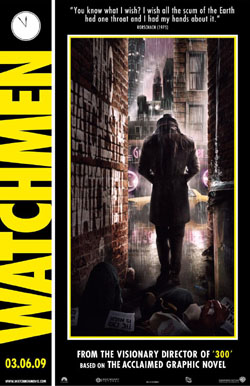 Here’s the thing: I don’t think the film can stand on its own, but I didn’t expect it to, so I was not disappointed. A lot of the negative reviews I’ve seen felt it was sterile, that the characters didn’t breathe, and basically didn’t work as a movie in its own right. I think that’s a valid criticism (though Slate’s review struck me as someone who came in biased against Snyder and got what they wanted). It was, in some regards, like a high school play, or one of those murder-mystery dinner parties: Here is the script; follow the stage direction, and it will all resolve by the end of the night. And that sounds like a negative criticism, but it really isn’t. It just felt like everybody had their marching orders, so those orders were followed. Maybe a better analogy is a collection of action figures suffocating in the packaging — they definitely look like you’d expect, but everybody involved is a little afraid to take them out of the packaging and play with them, for fear of them losing their value. And I’m not even angry about that, because I wanted them to stay as true as possible; I wanted to see the book’s characters, not someone’s interpretation of the characters.

After seeing the film I am not sure why anybody who is not into the book would want to see it; it’s like an accessory. I certainly was unable to take it as anything but a reflection and interpretation of the novel.This is not an independent statement; I don’t think it should be, nor was it designed to be. This is Zack Snyder holding the camera steady for Alan Moore’s Watchmen.

And for some reason I got really choked up through the whole thing. Seeing things unfold, watching these characters come to life, having my strings pulled with music cues…Kat pointed out that I have a lot more invested in all things Watchmen than I was aware of.

I think the story was pretty much intact. Yes, Black Freighter was missing (but I never really got it anyway); yes, the Bernies were basically there for a cameo. I was sad to see less about, say, Dr. Long, and we don’t see old Hollis Mason beyond one scene. But for the core story about the six main characters? Well done. Too talky, too slow, too plodding? Not for me. I wanted the details they offered.

Seeing the Gunga Diner and the news vendor…awesome. The fact that I could say many lines before they were spoken made me happy. This film was fan service, and I was served.

The new ending worked. I didn’t think it would, but it turned out that Veidt solved the problems of not just US and Russia, but Dr. Manhattan as well — gave him a reason to be in exile and stay gone. And as a fan, I appreciated seeing it called SQUID. 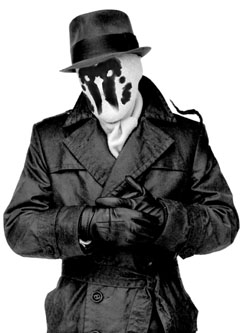 Rorschach was pitch-perfect. Brooding, terrifying, pathological. You could empathize (I could anyway) but not sympathize. Jackie Earle Haley needed to do a fantastic job or the fanboys would kill him on opening day. I believed it, and the prison scenes were brilliant.

Ditto Dr. Manhattan. I expected a different vocal treatment — booming and otherworldly — but the soft tones simply underscored his emotional detachment. Very well played. I bought the action figure. (I am part of the problem.)

Veidt was an embarassment. Wrong actor (too young and slight), wrong look (bad costume), wrong voice (what’s with the vaguely Eastern European lisp?), wrong interpretation overall. No charisma. Veidt is supposed to be George Clooney and Brad Pitt in one, a beloved but cunning public figure. He so loved the world he had to destroy part of it. But the love was missing. I got no sense that he felt any emotion about his plan; it played out with all the passion of a mathematics problem. Remember the triumphant “I did it!” page at the end of the comic? It was conspicuously absent from the film, and I think it was because this Veidt simply didn’t have emotions. Psst — that’s Dr. Manhattan’s job.

To go along with fake Veidt, we got fake Bubastis. I wish they had started with an actual cat and then added CGI.

Sally Jupiter was not old or world-weary or alcoholic enough. I could tell I was watching a young actress in old makeup trying to play someone else’s mom. They should have simply gotten two actresses; I missed the gravity.

“Desolation Row” by My Chemical Romance? Maybe it’s fine, but it does not belong as the end credits song. You get this tidy end shot on the crank file journal, knowing it contains the extremely intense story you’ve just seen, and then a fucking frat party breaks out. Go back to Dylan or something with emotional resonance. Even that Smashing Pumpkins track from the trailer would have been better.

Ultimately it neither enhanced nor detracted from what the book was, is, and will be. Alan Moore is right: the book did and does awesome and subtle narrative things that a movie can never do. Things like the supplementary material and the symmetrical visuals and the seemingly superfluous TV chatter filling you in on key backstory plot points as if they were throwaway words in the panel — that stuff was never going to be achieved on film. If you are seeing the film without reading the book, I’m going to tell you to read the book. If you have not seen the film, I’m going to tell you the read the book. If you’ve done both, we can have a very long conversation wherein I bore you to tears with my full-frontal nerdity.

But I have no fanboy rage about the movie, It is what it is, it knows what it is, and for all that, it’s pretty darn good.

This entry was posted in Movies & TV. Bookmark the permalink.