My new job is… 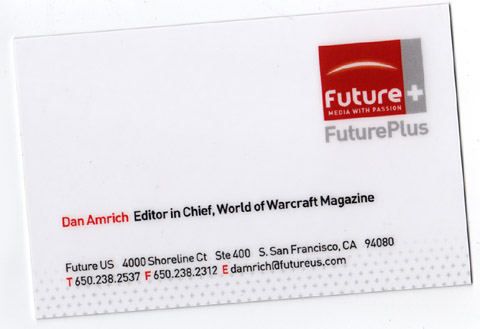 Future partners with Blizzard Entertainment for
World of WarcraftÂ®: The Magazine

08/19/09 â€“ Future, the special-interest media group and leading games media publisher, has announced an international partnership with Blizzard Entertainment, Inc., creators and publishers of World of WarcraftÂ®, to publish World of Warcraft: The Magazine, the official magazine of the record-breaking massively multiplayer online role-playing game (MMORPG).

Debuting this weekend at the BlizzConÂ® 2009 event in Anaheim, Calif., World of Warcraft: The Magazine is a new quarterly publication that covers all aspects of the industry-leading MMORPG, from game content to the players themselves. Launching simultaneously in English, French, German, and Spanish editions, the new magazine will be available via subscription only, sold through World of Warcraft Account Management or direct from www.worldofwarcraftthemagazine.com (which launches at 9.00PST/17.00GMT on Friday, 21st August) The magazine is available as a one or two-year subscription, pricing for one year is $39.95 in the US and 34.95 EUR or 29.95 GBP in Europe – two year subscription packages cost $69.95 in the US, 61.25 EUR or 52.50 GBP.

Each collectable issue will be packed with engaging, entertaining and comprehensive articles that cover all aspects of World of Warcraft through insider insights and player perspectives.

Future has pulled together a stellar team of games and technology journalists to produce World of Warcraft: The Magazine. Created by Futureâ€™s custom publishing team, FuturePlus, the team is led by Editorial Director, Julian Rignall and former Official Xbox Magazine Senior Editor, Dan Amrich. The magazine is designed by Art Director, Ryan Vulk, who joins Future from Wired. A panel of international journalists will contribute to the magazine, including European Editor Tim Edwards of PC Gamer UK.

Those who sign up for a subscription at Futureâ€™s BlizzCon booth located near the entrance of Hall B of the Anaheim Convention Center will receive an exclusive plush green murloc stuffed animal.

John Gower, International Director of FuturePlus, commented:
â€œBuilding on the global online phenomenon, World of Warcraft: The Magazine will provide an insiderâ€™s view of the game in the form of a glossy, high-quality, quarterly print title with beautiful, high-definition art. There is increasing recognition that there is a huge demand among gamers for print products to support their online experience and vice versa. Futureâ€™s experienced team will create an essential magazine for World of Warcraft enthusiasts around the world. Future has a world-leading games media portfolio and this major launch builds on our position in the industry.â€

Paul Sams, Chief Operating Officer of Blizzard Entertainment, said:
â€œFuture produces some of the most respected gaming magazines in the industry, and weâ€™re pleased to be working closely with them to make World of Warcraft: The Magazine a true standout product. Together, we look forward to offering World of Warcraft players a great mix of entertaining and insightful content in every issue.â€

Julian Rignall, Editorial Director of World of Warcraft: The Magazine, added:
â€œWeâ€™re bringing together an international team of player-writer experts to create in-depth articles about World of Warcraftâ€™s design, art, lore and community, as well as all aspects of its gameplay. Itâ€™s really important that our magazine articulates multiple player perspectives, so that the editorial offers balanced â€“ and sometimes even opposing â€“ points of view on winning strategies and tactics.â€

To subscribe, please visit www.worldofwarcraftthemagazine.com at 9.00AM PST/17.00 GMT from Friday, 21st August when BlizzCon starts, or visit Futureâ€™s booth at the show, near the entrance of Hall B.

About Future
Future plc is an international special-interest media group that is listed on the London Stock Exchange (symbol FUTR). Founded in 1985 with one magazine, today we have operations in the UK, US and Australia creating over 180 special-interest publications, websites and events for people who are passionate about their interests. We hold strong market positions in games, film, music, technology, cycling, automotive and crafts. Our biggest-selling magazines include T3, Total Film, Digital Camera, Fast Car, Classic Rock, Guitar World, Official Xbox Magazine, Official Playstation Magazine, Nintendo Power, Maximum PC and MacLife. Our websites include gamesradar.com, bikeradar.com, techradar.com, and musicradar.com. Future produces over 4 million magazines each month; we attract more than 18 million unique visitors to our websites; and we host 25 annual live events that attract hundreds of thousands of enthusiasts. In addition, Future exports, syndicates or licenses its publications to 90 countries internationally, making us the UK’s number one exporter and licensor of monthly magazines.

This entry was posted in Games, WoW. Bookmark the permalink.