So here’s what I did Friday night: 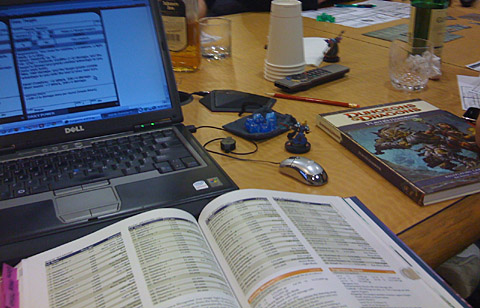 And I had a blast.

We’ve been talking about getting a real-life tabletop D&D game going for about nine months now, ever since we found out 4th Edition was coming out and basically rebooted the whole game. I babbled about it a few months ago and even went public with my search for the perfect dice. (I ultimately went with these.) Meanwhile, I hit the books and got really stoked to reconnect. I was never really hardcore about D&D, but I did play in high school and I figured, knowing what I know now about multiplayer gaming and patience and storytelling and stuff, this could be really great. Playing a lot of WoW certainly helped stoke the flames for a simpler, more straightforward RPG experience.

Turns out Rob Smith used to be really into it and is an experienced DM, but has been away for so long that he was starting over too. Paul Curthoys had a stash of miniatures that he hadn’t touched in 20 years or so and really wanted to play again. Despite her love of fantasy and voracious reading habits, Kat had never played D&D. Neither had Gary Steinman, but he was interested. And Evan Lahti seemed to have some experience, but not with 4th edition. We were a band of newbies and born-again newbies.

So we danced around “when” for months and I finally just picked a date that I hoped everybody could make. (Someone had to roll for initiative.) So armed with books, dice, a laptop, and some very adult beverages — apparently it’s all about various types of scotch — we stayed late at work this past week to roll up some characters. 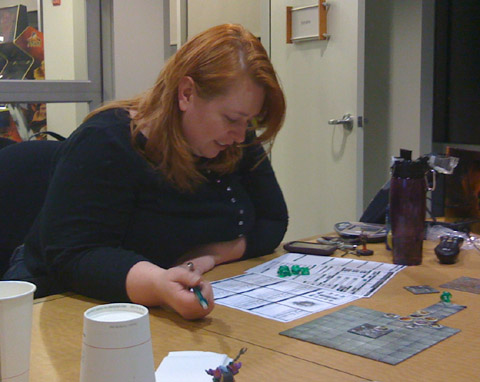 Kat and I had created ours (using the very, very helpful DDI Character Builder) ahead of time, but we figured the first meeting would be just to get everybody up to speed anyway. We wound up staying for several hours, started the adventure, and had an epic combat session. Here’s what I learned:

I can’t wait for the next session. I have to travel this week but I’m getting back Friday afternoon. Friday night, it’s Magic Missile time.